Heather and Terry Dubrow married in 1999. They live in Orange County, and have four children together-- Nicholas and Maximillia, and Katrina and Collette. Heather, born Heather Paige Kent, is an actress, known for portraying Lydia DeLucca in the TV show, That's Life. Heather has also starred on the hit reality TV show, The Real Housewives of Orange County, since Season 7 in 2012. Dubrow was born in the Bronx, and received a BFA from Syracuse University in 1990. According to Wet Paint, Heather has a net worth of $4 million by herself, and $12 million, combined with her husband. Click through our gallery to learn more about the Dubrow's, and to check out some of their best pics. (Instagram/HeatherDubrow) 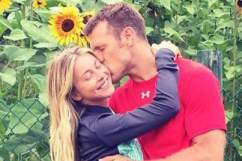