Hope Higginbotham is the ex-girlfriend of Robby Hayes who Bachelorette viewers have heard about on several occasions this season. On the show, JoJo Fletcher became worried when she was told that Hayes’ ex-girlfriend’s roommate “Alex” was “spreading rumors” that Hayes broke up with Higginbotham in order to be on The Bachelorette. Hayes denied that this story was true, though Bachelorette guru Reality Steve has reported on several occasions that Hayes did, in fact, do just that. According to Reality Steve, “Robby & Hope went 2 Italy together in Nov of last yr. But according 2 him, the relationship was so bad, he should’ve ended it 9 mos earlier.” Steve then reported that a month later, Higginbotham and Hayes took cutesie onesie pajama picks for Christmas together and posted the evidence online. An insider told OK! Here’s the Situation:

just saw them together earlier this year and have friends who are really good friends with them. My heart breaks for Hope because I know how much she loved him and his family. She spent more time with his family than she did her own I believe. She would drive to Sarasota where he worked and visit almost every chance she got if he didn’t come home. Like every couple with their ups and downs through time they were the couple you jokingly see photos of or out and about and ask when are y’all getting married?! It seemed Robby was still growing out of his “fraternity” college life and Hope still in school but they were the cutest couple.

Since season 12 of The Bachelorette began airing, more and more scandalous stories have come out about Hayes, especially when it comes to his ex. Read on for our 5 Fast Facts on Higginbotham and her relationship with Hayes below.

1. Higginbotham Picked Hayes Up from Jail In 2012

Radar Online reports that Robby Hayes has been arrested twice in his life and one of those times was for a DUI in 2012. The charges were later dismissed, but Higginbotham is reported to have picked him up from jail. 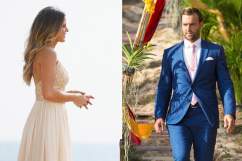 2. In An Email to Reality Steve, Higginbotham Implies Hayes Threatened Her to Keep Quiet

Take the path less traveled… Or as our parents always taught us, 'Take the high road.' #homesweethome #TheBachelorette ?@Lyndseymis

Reality Steve has been vocal about his reports surrounding Hayes’ scandal with his ex. Apparently, Higginbotham was supposed to do an interview with Steve about Hayes, but recently sent him an email implying that she has been told to keep quiet about the details surrounding her break up with Hayes. Reality Steve published this alleged email from Higginbotham:

Unfortunately, I will not be able to follow through with the interview you requested. It has been brought to my attention by the opposing party that any further actions on my part, will result in negative consequences. Many people (including myself) have been deeply hurt by the situation, and I do not want to add to, or prolong the negativity. I never signed up for my previous relationship to be advertised to the world, nor did I sign up to have America judging my past as well as my future. With that being said, only Robby and I know the words spoken and events, leading up to our break up toward the end of January. I do apologize for the inconvenience. I hope that you can respect my wishes to move on, and leave that part of my past where it should be… in the past.

On the Bachelorette: Men Tell All special, cast member Chad Johnson also said that Hayes had threatened Higginbotham. In addition, Johnson posted an Instagram photo (above) of himself showing serious PDA with Hayes’ ex-girlfriend Hope. Could they be teaming up for a publicity stunt or are they just trying to expose a liar? What do you think?

3. Hayes Has Denied Ever Threatening Higginbotham

Sometimes life's a constant struggle in deciding will it be a @benandjerrys Half Baked or Cherry Garcia type of night? ? ?@Lyndseymis #TheBachelorette

In an interview with Bustle.com, Hayes has spoken out to explain that he never threatened his ex-girlfriend and that he hasn’t even talked to her in months. Hayes explained:

I have not spoken with Hope since the day we broke up nor have I spoken to Chad since his exit from the show. That goes for my entire family as well … I was told Hope was writing a letter to Reality Steve and asked him to end this negative talk and put it in both of our past. Although I was happy she said she wants all of this in the past (because that’s exactly what we are to each other, the past) I was not okay with the fact that she had insinuated that I threatened her.

Hope is now very far in my past (as is Chad), although it seems that she is trying to keep it present. We all know Chad is using these women to gather more attention, and it’s sad to see the women’s emotions played with.

There are rumors that JoJo Fletcher actually breaks up with Hayes on the finale episode because she thinks there’s more to his relationship with Higginbotham. We’ll have to watch the show to see if the rumors are true.

Just like JoJo Fletcher and Bachelorette cast-off Chad Johnson, Hope Higginbotham works in real estate as a realtor for Berkshire Hathaway HomeServices in Ponte Vedra Beach, Florida. According to OK! Here’s The Situation, Robby Hayes’ sister sent in an application to be on The Bachelorette while Hayes was still dating Higginbotham. The website also reports that Higginbotham allegedly cheated on Hayes with his brother’s best friend.

Cheating allegations have been brought up against Hayes as well.

5. An Insider Has Made Accusations About Hayes Since His Break Up With Higginbotham

According to an insider who spoke with OK! Here’s The Situation, they believe that Robby Hayes could be gay. The insider explained:

I questioned if he was gay past few months after the only things that he would post were of him and guys and a few pictures here and there of him and Hope. Maybe that’s why they broke up? Cause she thought he was gay?!

We don’t think that Hayes is gay. Do you?