The "#FreeTheNipple" movement, protesting censorship of the female breast, sexual objectification and pushing for the decriminalization of going topless, reached a peak in 2014, when Lina Esco's Free The Nipple film was released. Even before the movie came out, the movement was in full swing, with @FreeTheNipple created in 2012. Celebrities have voiced support for the movement and even though it's not tied to Go Topless Day, we're taking a look at those who have shown their support for #FreeTheNipple.

The most most recent celebrity to show her support is Bella Hadid, seen above. The 19-year-old posed topless for French Vogue, following in the footsteps of her sister, Gigi Hadid, who appeared topless in a previous issue. "#Freeingthenipple for our French Vogue cover with my brothers @mertalas & @macpiggott," she wrote on Instagram.

Hadid was asked about the movement in a Glamour interview. "I mean, my mom is European. My whole family is European," she said. "We were always very comfortable with our bodies. It’s fine if you don’t want to show your body like that. But if a woman wants to show her body, I’m all for it. Everybody loves a little nip." 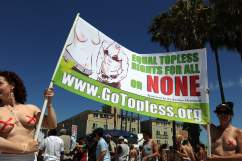