His death came just a day after a performance at The Forum in Los Angeles, according to Billboard. He was preparing to fly from Santa Monica, California, to the next stop on his tour, El Paso, Texas, when he had the heart attack, the music site reports.

His son Ivan Aguilera said in a statement, “My father’s untimely passing is a tragic loss for all of us, his family, colleagues, and fans alike. We give heartfelt thanks for the outpouring of condolences we have received from around the world including from President Enrique Pena Nieto. We know that our father will miss entertaining his countless fans, who brought him tremendous joy in life.”

Juan Gabriel’s family said they would release further details about his death in the coming days, and asked for his fans and media to “to allow them this very brief window to mourn the loss of Juan Gabriel.”

In November 2014, Juan Gabriel was hospitalized in Las Vegas for three weeks during a battle with pneumonia, according to the Latin Times.

“Everything is fine,” he wrote on Twitter. “There is nothing to worry about, we only need to take care of ourselves. Thanks to all the kind messages and good wishes.”

Despite rumors he was near death or had died spreading on social media, he made a full recovery and returned to touring.

But Juan Gabriel told the Latin Times last August that he died and came back to life during that health scare.

“I already died when I was in Las Vegas. I don’t remember if it was May or June, but I came back because they gave me permission to come back,” he said. “I don’t know for how long, but I know that while I sing, write nice songs, record, and go up and down with my tours, I will transform into what I’ve done: music.”

That same month, sources close to him told TVnotas the singer “doesn’t take care of himself, it’s going to be difficult for him to get better”

The source said Juan Gabriel “needs to follow a strict diet, drink a lot of water and eat healthy, fruits, vegetables, and everything in small portions, he also needs to rest a lot, and he is not doing any of that,” adding that he has put on weight and complained about muscle pain and lack of breath after concerts.

“He complains about muscle pain, but what worries him the most is the lack of air. As soon as he finishes ‘un Palenque,’ he immediately walks to his dressing room, but he takes his boots off because he can’t walk in them, he needs someone to help get there,” the source told TVnotas.

Juan Gabriel was injured in 2005 after falling off the stage at the Toyota Center in Houston, suffering a concussion, fractured neck and a broken wrist, the Houston Chronicle reported at the time. He was bedridden for eight months and kept off his tour.

Flores wrote, “Accompanied by a full mariachi band, an orchestra and a troupe of 20-plus dancers, the Mexican crooner serenaded his fans at The Forum for two hours straight. The high energy show kicked off in full force with a patriotic performance that screamed Mexican pride with follkloricos and breathtaking images of Mexico playing on the screens. Then, “El Divo de Juarez” appeared on the 360-stage wearing a black suit with a royal blue silk shirt underneath that matched the color of his mariachi.”

Juan Gabriel, who was born Alberto Aguilera Valadez, was beloved by generations of fans and known for his flamboyant style. He is survived by his four children.

Read more about Gabriel at the link below: 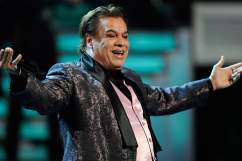