Lionel Richie’s daughter and Justin Bieber have been pictured out together on multiple occasions. It’s unclear if it’s once, twice or three times. Sofia Richie, 17, is the daughter of the former Commodores frontman and his second wife, Diane Alexander. They divorced in January 2004.

People Magazine reports that Richie and Bieber have spent the last few days together in Toluca Lake and in Laguna Beach. On August 11, the Canadian singer jetted out to Japan where he had two concerts.

1. She Was the Face of Madonna’s Clothing Line But Regards Sister Nicole as Her ‘Style Icon’

In 2015, People Magazine reported that Richie had been named as the new face of Madonna’s youth clothing line, Material Girl. She told the magazine at the time, “I am a Madonna obsessor since I was 5, so it’s insane that this is happening.”

Despite that, Richie told Teen Vogue in 2015 that, “Nicole is definitely my style icon, and she’s the best person to go shopping with. She’s really honest. Other people are afraid to hurt your feelings, so they’ll tell you something’s cute when it isn’t, but she’ll be like, ‘No, discard that.'”

She also told People while promoting Material Girl, “When I was 15, I would steal clothes out of my sister’s closet, like all day…I like to wear basic items, but I try to pick myself apart from people by adding in certain things like a cool jacket or some cute boots or a cool hairstyle.”

Entertainment Tonight reported in February 2016 that Richie had made her runway debut at New York’s Fashion Week. At the time Richie said appearing on the cover of Vogue was her “big” life goal.

After her big appearance on the runway, Richie told E! News, “I’ve just watched so many falling videos on YouTube that I’m petrified, especially since my dress is so long. They had me in platforms but the falling theory was in my head, so I decided to choose my own shoes…I never thought I’d actually be in this position of ever walking the show and here I am.” In 2014, Richie told Elle, “I don’t think I could ever do runway.” 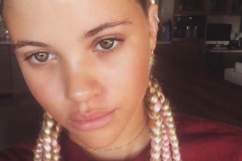 2. Against Her Father’s Wishes, Richie Aspired to Be a Part of the Music Industry

Earlier this year, Richie told Entertainment Tonight that she had dreams of becoming a singer. She said, “When I was 13, I was saying that I wanted to be signed to a label. I was begging my dad to get me signed with somebody.” Though, Richie says she’s glad her dad discouraged her saying, “I was determined that I was so ready, and I was in the perfect spot to do all these crazy things. But I just needed to grow up and learn about life and that wasn’t going to be as easy I thought it was going to be.”

While in 2012, she told Teen Vogue that she was trying her hand at freestyling.

Summer Of Sam ft. WaleDirected by Pierre Auroux and Samantha Ronson Shot by Pierre Auroux Special thanks to Angel Cabada and Supra and Kr3w And to Luigi & Casper for dancing on concrete and all involved2013-03-14T23:37:00.000Z

In 2013, Richie appeared in Samantha Ronson’s video for the song, “Summer of Sam.” Richie’s sister said Bieber’s new squeeze “was asked” to appear in the video. While Teen Vogue reported that Nicole Richie had secured Richie’s role in the video. Richie told the magazine about the experience saying, “It went till, like, two in the morning. It was horrible, but so much fun!”

She also said that her brother-in-law, Good Charlotte frontman Joel Madden, wanted to produce her first record saying, “He takes me to the studio for voice lessons, and we write together. He’s really cool. He’s one of my best friends.”

In 2014, Richie told Nylon magazine that, “I grew up watching my dad be a singer, so it’s something I’ve always been interested in. The past three years I’ve really been studying writing, and I take vocal lessons every day.”

In addition to her 1 million Instagram followers, Richie is also a big hit on Tumblr. She told People about it in 2015 saying, “I never really thought I would make a blog myself. Then I got super interested in pictures and runways. I started following a bunch of model blogs and runway blogs and then I just started following designers. Sometimes I’ll see something on Tumblr and think, ‘Oh my God, how did I not think about this?'”

On her Facebook page, Richie refers to herself as “Daddy’s girl.”

4. Richie Grew Up Considering Michael Jackson to Be Her Godfather

In a 2014 feature with Nylon magazine, Richie tried to put forward the notion that she had a normal teenager’s life. She spoke about having an 11 p.m. curfew. Richie said, “It’s a generous curfew. I have time to be a 16-year-old. And sometimes just being a kid is fun.” That feature also mentioned that Richie was home-schooled.

Richie told Teen Vogue about her family life saying, “We like to play pranks. My dad always jokes that we should have a reality TV show because my friends and I pull crazy stunts, like putting Saran Wrap on the toilet.” It’s during that interview where Richie mentions that she grew up with Michael Jackson as her grandfather and that Paris Jackson is among her close friends. Richie says, “She came over the other day, and we went to the mall, watched Harry Potter, and went swimming.”

In an interview with Nylon magazine, Richie said she had been “thousands” of her dad’s shows over the years.

5. One Friend Said Richie Won’t Let Rumors of a Relationship With Bieber Go to Her Head

Bieber performing at the Billboard Music Awards in May 2016. (Getty)

A friend of Richie’s told Hollywood Life that that “Sofia is keeping a solid head on her shoulders and refuses to get carried away in the five seconds of fame that surround whoever Justin’s dating.” The friend also said, “Sofia runs with a much older crowd, most of her close friends are in their 20’s and some are even in their 30’s so the age difference between her and Justin really isn’t a big deal in her world.”

The reports of Bieber and Richie dating come just says after the singer was linked with Australian model Sahara Ray.

Read More
5 Fast Facts, Breaking News, Celebrities, Justin Bieber
Lionel Richie's daughter and Justin Bieber have been pictured out together on multiple occasions. It's unclear if it's once, twice or three times.