Tyga, born Michael Ray Nguyen-Stevenson, is a 26-year-old rapper whose name is an acronym for Thank You God Always. The Compton native grew up listening to Lil Wayne, Camron, and Eminem. Before releasing a number of hit songs, the Cali boy came out with mixtapes. His debut tape in 2007 scored him a record deal with Young Mary Entertainment. According to the bio on his show's website, "...when he's not riding around L.A. streets in his golden chariot, the rising rapper is cruising in his Rolls-Royce Drophead Phantom or one of his many other head-turning toys he's added to his garage."
(Instagram/kinggoldchains) 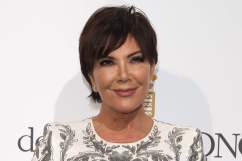