Larry King has been married a total of eight times to seven different women, but it looks like he may be headed for a rocky marital road soon if the reports are true. Unfortunately, a cheating scandal has broken and King’s wife Shawn has allegedly been having an affair for about a year, according to Page Six. Larry and Shawn King have been married for almost two decades, tying the knot in 1997. Read on for the unfortunate details of King’s cheating scandal and the man who is said to be involved.

1. The Affair Is Reported to Be With a Man Named Richard Greene

Leaving Nobu after eating so much food Larry grew a flower out of his head. #happyanniversarybabe

A source tells People that Shawn King’s alleged affair is with a man named Richard Greene, who is a former lawyer in Los Angeles, California. Daily Mail reports that currently Greene works as a communications strategist and public speaking trainer. Shawn supposedly told Greene her marriage was over with Larry and, though she and Greene briefly split, they reunited.

2. Larry and Shawn King Filed for Divorce in 2010 With Rumors of Infidelity

In 2010, Shawn and Larry King were set to divorce and there were rumors that Larry had cheated with his wife’s sister, Shannon Engemann. There were also reports that Shawn cheated with her sons’ baseball coach. However, those rumors were denied by the couple. People reports that the 2010 divorce filing only lasted for three months before the couple reunited.

Ready to do another Back and Forth With Shawn and Larry King. Always a barrel of laughs! And sometimes we throw punches:)

Page Six reports that Shawn King and Richard Greene met when Greene was a guest on the podcast, “Back and Forth with Shawn and Larry.” This is a program in which Shawn and Larry both participate.

According to Daily Mail, Greene was Princess Diana’s speaking coach. Other clients include Naomi Campbell, Will Smith and Jada Pinkett Smith.

4. Nude Photos Are Reportedly In the Mix

5. Larry and His Wife Are Staying Together

When TMZ caught up with Larry King today, it appeared that King intends to work things out with his wife. In the past, they have had ups and downs, but they have stayed together. The couple has two teenage children together. 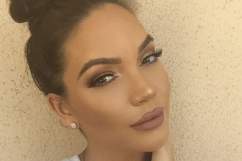