Amell and Ricci at the premiere of The X-Files. (Getty)

It’s good to be Robbie Amell right about now, and frankly it has been for quite some time. Amell has had major roles in television shows like The Tomorrow People and True Jackson, VP, along with recurring roles in The Flash, Life With Derek, Revenge, and the recent X-Files comeback. Starting tomorrow, he’ll be seen in the movie Nine Lives nationwide, a film where Kevin Spacey is trapped inside the body of a cat. A family movie going up against Suicide Squad, it’ll have little new competition to face. Should it do well at the box office, Amell could be one of the next big movie stars.

Relationship-wise, Amell has been one of the most stable young celebrities for years now. He fiancee is Italia Ricci, likely known for her recurring role on Supergirl and her lead role on ABC Family show Chasing Life, which aired from 2014-2015. Their relationship dates back to before Amell was a CW star, and even before he was a Nickelodeon star. It has withstood the test of time in a way other young Hollywood romances simply have not, and the way they talk about each other suggests that the relationship is built to last.

1. They Met on the Set of Cheaper By the Dozen 2

Amell and Ricci have been dating since July of 2008, and there had been debate over where the two had met – they’ve appared in several films and TV shows together. One of the earliest ones is what had been most widely speculated, and that is Beta House, a direct-to-video American Pie film. When Hello Magazine in Canada broke the news of the actors’ (both Canadian) engagement, they said the two met on the set of Beta House in 2007. They also described them as having been “inseparable ever since.”

Of course, stories vary from person to person. Amell has said they actually met while he was working on Cheaper By the Dozen 2. He even said that he had forgotten a conversation they had at the bar during that time, and that it wasn’t until Beta House that they grew closer, and “he convinced her to move to LA to act.” Not only did he meet Ricci during Cheaper By the Dozen 2, but according to The Star, he also met “two actors destined for his wedding party.”

2. They Have Each Appeared in Films and TV Shows Starring Their Significant Others

Amell and Ricci at a screening of The DUFF, a film Amell starred in and Ricci appeared in. (Getty)

These were far from the only times Amell and Ricci have gone on to appear in the same project. As their filmographies suggest, whenever one has been a major player in a film or TV show, the other has made an appearance eventually.

Ricci was the star of Chasing Life for two seasons, and eventually Amell found his way onto the show, albeit in an uncredited role. Similarly, when Amell was in the main cast of Nickelodeon’s True Jackson, VP, she made a cameo in the episode Pajama Party in 2010.

3. They Got Engaged in 2014, Just After Their Six Year Anniversary

She said yes!!!… I think. I can't really be sure. I'm going marry my best friend. @italiaricci

In July of 2014, Amell and Ricci each posted adoring Instagram photos with captions wishing the other a happy 6th anniversary. Just a month later, it was reported that the two were to be engaged after Amell posted the above Instagram picture, announcing that he was going to marry his “best friend.” At the time, Chasing Life had just begun airing for Ricci. For Amell, The Tomorrow People had recently been cancelled, but The Flash was set to debut on The CW.

4. Ricci Has Said the Secret to Their Successful Relationship is Their Friendship

Ricci has been asked in various interviews about her relationship, and her priase of Amell is incredibly effusive. Two years ago, when asked by Hollywood Life what made them a successful couple, she said “We’re really good friends and we’re completely honest about everything because this industry can be really shady… We just completely dig each other, we have for six years.”

Amell, though he has talked about the upcoming wedding on occasion, has other thoughts on the keys to success in their relationship: “Trust. And not talking about your relationship in interviews.”

5. The Wedding is Set For October, and Stephen Amell’s Daughter Will be a Flower Girl

Amell and Ricci at a charity event. (Getty)

When talking to People Magazine, Amell let it slip that their tentative wedding date was October 15th, 2016. He hasn’t said much since regarding the wedding, as he says he “got in trouble for giving the date once in an interview.” But he has said that he intention is to make his wedding to Ricci “the best day of her life.”

One way he’s going to help with that is by enlisting his cousin, Arrow himself Stephen Amell. Stephen’s daughter, Mavi, will be a flower girl at their wedding. Ricci describes Mavi as “just the most perfect little human.” 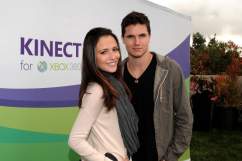 Robbie Amell & Italia Ricci: The Pictures You Need To See