Tonight is the Season 3 Premiere of Running Wild with Bear Grylls, and it’s bound to be one of the most exciting seasons yet. The survival skills reality TV show stars British adventurer, writer, and survivalist Bear Grylls, as he takes on a series of exotic adventures with different celebrity guests. In the past, we’ve seen Zac Efron, Channing Tatum, and Ben Stiller, face the unpredictable outdoors, and this season, we’re in for a lot–including the chance to watch Courtney Cox eat a scrotum full of maggots.

For all the details on what to expect on the premiere, what time to watch the show and live stream details, read on below. 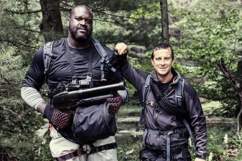