D.C. Rapper Swipey’s name became a national Twitter trend after reports of his death emerged on August 21. The head of his record label, Kevin Baldwin, tweeted a tribute to the deceased rapper saying, “May Allah have mercy on him. This stupid mentality has to stop!! #missingyoualready #notbywordsbyaction #word2dawise.” Swipey, known for his viral hits “Best Friend” and “Dirty” had just dropped his album, Sorry Not Sorry, in July, had worked with artists Shy Glizzy and Lil Durk during his short life. He was 18 years old.

1. His Manager Told Heavy.com That Swipey Was Shot Dead During a Party at His Mother’s House

His manager, Kevin Baldwin, who wasn’t present at the party, told Heavy.com, citing family members, that Swipey was fighting with a girl that he “used to mess with” at a party in Suitland, Maryland. The fight happened at Swipey’s mother’s house, at around 1 a.m. on August 21, according to family members. Baldwin said that the rapper’s brother told him that Swipey had “messed around” with the girl in question around six months previous but wasn’t with her at the time of his death.

A friend of Swipey’s wrote on Twitter that the rapper was shot in the head “twice close range.”

We are on scene of a homicide investigation on Parkway Terrace Drive in Suitland.

Swipey was pronounced dead at the scene, along Parkway Terrace Drive in Suitland. Baldwin told Heavy that Swipey and the girl were constantly fighting with resulted in Baldwin becoming a “Dr. Phil” figure. In one instance, Baldwin said the girl stole Swipey’s clothes while he was in the shower and posted photos of the swag to Instagram.

His mother, Freda, told the Washington Post, “He was a good guy, he was a nice guy, he never tried to start no trouble. I’m crying. I’m crying because I love my son.”

A police source told the Post that investigators do not believe the shooting was random. A reward of up to $25,000 is being offered for information that leads to an arrest. Anybody with any information is asked to call 301-772-4925. 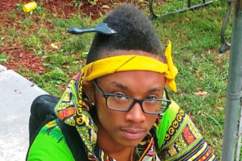 2. At the Time He Signed His Recording Contract, Swipey Had a Scholarship to Morgan State

Kevin Baldwin told Heavy.com that when he signed to his Men of Principles record label that the rapper had graduated high school with a 3.0 GPA. He added that Swipey had a scholarship to Morgan State University in Baltimore.

Baldwin remarked that Swipey had “no stable foundation” to build upon his academic achievements. He said that when he signed the slain rapper, he was taken aback by how “well-mannered” and “intelligent” Swipey was. Baldwin also said that he believed young rappers “can’t stick” with the same people they grow up with until they make it. He said rappers “can come back” for their people later.

3. In a December 2015 Interview, Swipey Said That Rapping Was in His ‘Blood’

Swipey told Dionee Milli, “I was around music all my life. I got a uncle that wanted to be a rapper, that is a rapper, a stepfather that used to rap. So that music s**t is always around me. It’s in my blood.”

The rapper was one of those who appeared as part of WPGC’s 2016 Prom Pull Up in June, doing surprise shows at schools across the D.C. area.

4. The Hashtag ‘RIPSwipey’ Is Being Used for Fans to Share Their Memories of Swipey

In the hours after his death, the hashtag “RIPSwipey” became a nationally trending topic in the United States. While on Instagram, Swipey’s collaborator Romilli wrote, “R.i.p my brova my heart. Some Fxck n—-s hated on you real live was s–ting on any Yung n—a Ina dmv I LOVE YOU BROVA Nobody Got You I Got You!!! I AINT WANNA POST THIS S–T BUT MAN I WAS W YOU ALL THESE YEARS AN YOU LEAVE ME NOW DAMN MOE GONE BUT NEVER FORGOTTEN !Im Hurr.”

Here are some of the most poignant tributes to Swipey:

It's crazy how a fan can feel so close to an artist that we support but never encountered with…. I know the whole DMV hurt #RIPSwipey ????

Meetin wit wax and my goodmen this am . God bless DMV . #ripswipey

Come on DMV, when this gonna stop? It's so much talent here, but it's so hard to make it cause of the hate. #ripswipey

Young bull was just trying to make it out. But the choices and decisions he made, cut his dream short. #ripswipey pic.twitter.com/Hh2V8P2nQx

WJLA reports that Swipey was the first man killed in the Suitland area early on August 21. The station notes that police are not saying if the two shootings are related. The second took place in the Upper Marlboro neighborhood of the town. The above news item from the BBC in 2013 speaks about the lower murder rate in the U.S. capital. While WTOP reported in May 2016 that D.C. had the tenth highest murder rate in the country. The Washington Post reported in August 2015 that D.C. Police Chief Cathy L. Lanier believed the rise in murder rates involved a number of previous offenders who were back on the streets.