Tonight is the MTV special on The Hills with Lauren Conrad giving fans a behind-the-scenes look at what was real and what may have been planned or scripted. If you’re interested in watching the show, check out all the details on what channel it’s on, what time it airs, and more below. 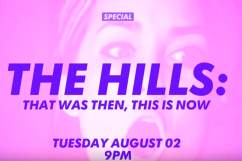 SHOW TITLE: The Hills: That Was Then, This Is Now

PLOT DESCRIPTION: In a statement released by MTV to Vanity Fair: Lauren Conrad, the protagonist and star of The Hills, takes us back to revisit MTV’s cultural phenomenon in celebration of the show’s 10-year anniversary. Lauren cuts through the clutter to address some of the show’s best-kept secrets and reveal what it was really like living her pivotal years on camera. She looks back on her tumultuous early days in LA and explains how they led to her current successful career and loving marriage, answering all the questions the audience is dying to know along the way. As we reconnect with our favorite girl from Laguna, we realize she’s grown up to be a cultural icon . . . and she’s still not afraid to tell it like it is.

Read More
MTV, Reality TV, TV
When is the reunion show of The Hills on TV? Get the details on what time the 2016 MTV special is on TV, what channel to watch and more here.