Today is the big cast reveal for season 23 of Dancing With the Stars and we’ve got all the details on the predicted pairings, this season’s pro dancers, what channel to watch the reveal on, what time it all goes down and more below.

‘Dancing With the Stars’ 2016 Cast Reveal: Who Are the Contestants?

CAST REVEAL TIME: GMA airs from 7 – 9 a.m. ET, but the reveal usually takes place some time after 8 a.m., so you should be safe watching after the 8 a.m. ET mark. Reveals generally happen closer to 8:30 a.m. though.

LIVE STREAM: Click here to check out how to watch ABC and Good Morning America online to see the big DWTS cast reveal.

DWTS co-executive producer Rob Wade talked about what goes into picking the contestants each season on the show, telling People:

We obviously have a list of people that we begin to reach out to months in advance. We’ll get one or two people locked in and start to build around it. It’s like planning a dinner party. Once you’ve invited some friends, you start to work out which other friends to invite that will balance out the table.

One pro who is noticeably absent from the cast list appears to be Mark Ballas. It looks like Ballas, unfortunately, may sit-out this season. 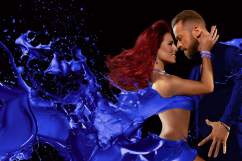