Saying goodbye is never easy, but a Houseguest must go home tonight ?.

Bridgette Dunning and Da’Vonne Rogers were up on the block tonight after Paulie won the power of veto and saved himself. Paul decided to give Da’Vonne a hint that she was going up on the block just in case she had a round trip ticket to stay in the game. Both Paul and Paulie were scheming to have Da’Vonne booted from the house. In addition, Bridgette, along with several others, were gunning for Da’Vonne to be sent home. While chatting with Paul, Da’Vonne tried to figure out what the game plan was …

When Da’Vonne had a heart-to-heart with James, James decided to try to save his friend even though he was originally going to back-stab her … but this decision was only temporary. As each of the girls pleaded their cases up on the block, they gave shout-outs and tried to keep things positive. Unfortunately for Da’Vonne, James and many of the other houseguests voted for her. 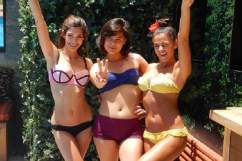