The original judges-- Sharon Osbourne, Louis Walsh, and Simon Cowell-- will be returning to the X-Factor this season. Last year, the show's ratings reached an all-time low, with an average of 7.85 million viewers per episode. Singer Olly Murs and Strictly Winner, Caroline Flack, the judges last season, are out this year, and Cowell has hinted that they weren't cut out for the job. According to Mirror, Cowell thinks Flack and Murs were too concerned with their own careers to develop new artists on the X Factor. "When you're sitting as a judge and you're judging these shows you have to like people. If you don't, you can't do this job. It's as simple as that." He added on, "Singers don't want to find other stars. It's just not in their DNA. They only think about themselves. That is the nature of being a solo artist." Cowell developed the X Factor franchise, which was created to replace the show 'Pop Idol' (2001-2003). Despite Cowell's attempts to replace last year's judging panel with a more enticing list of celebrities, Saturday's premiere attracted 800,000 less people than last year's. The Daily Mail writes, "The figures showed The X Factor attracted 34% of the audience share, which showed a drop-off from the launch of last year's show which had initial overnight figures of 7.6 million and an audience share of 39%. X Factor's second series in 2005 premiered with 6.72 million viewers, meaning this year's effort got off to it's bumpiest start in 10 years." (Getty) 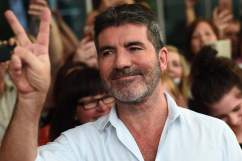