Season 3 of You’re the Worst is upon us, and there’s plenty of drama in store. With a pregnant Lindsay and an erotically-obsessed (in his book, at least) Jimmy, there’s no saying how the lives of our favorite foursome will pan out this season. In an interview with TV Line, Chris Geere describes Season 3 as, “an exploration of human emotions and how most of the time, we can’t deal with them. You learn how to cope with them.”

Want to learn more about what Jimmy, Gretchen, Edgar and Lindsay will face this season? Read on for more spoilers.

Gretchen struggles with depression once again, and begins therapy to help tackle her issues. And who’s her therapist? None other than Samira Wiley from the hit Netflix series, Orange Is the New Black. Wiley will play the role of Gretchen’s doctor, Justine.

All will presumably go well– that is, until Jimmy decides to join Gretchen’s sessions and makes everything about him.

2.Edgar Will Suffer a Resurgence of PTSD

Edgar secretly decides to go off his PTSD medication, which doesn’t bode well for the former weed dealer. And while Jimmy and Gretchen are blind to Edgar’s suffering, Dorothy will be there to offer her support.

In an interview with TV Guide, actor Desmin Borges says, “I think this year’s really all about Edgar taking hold of what’s dear to him and steering the ship for himself rather than relying on people making decisions for him and tell him where he needs to be and what he needs to do. It’s going to be exciting. I know [the storyline] sounds so sad, but it’s deep-rooted and real –real humor and feelings.”

Our favorite wacky sweetheart, Lindsay, is (unshockingly) struggling to deal with the bun in her oven. She quickly realizes that getting back with Paul wasn’t the best decision, and that it won’t pan out into the cozy lifestyle she’d imagined. In the same TV Guide interview, Donohue discusses her character’s Season 3 pickle. “I think it’s something a lot of women struggle with. I could speak from my own experience, where I enjoy the safety and security or what it feels like to feel safe or stable. And also she’s pregnant with Paul’s child, so it’s harder to bounce. I think if she wasn’t pregnant it would be easier to leave.”

It’s still up in the air whether Lindasy will actually have her child, so we’ll have to wait and see on that one…

The season picks up shortly after Gretchen and Jimmy tell one another “I love you” (from the end of last season) and we can only assume that Gretchen will voice her thoughts on Jimmy’s incestuous novel as he reads it aloud… again and again.

5. It’ll Be About More Than Just Gretchen

In the past, the show’s plot tended to revolve around Gretchen’s struggles. This season, the ensemble will take center stage. In an interview with TV Line, Aya Cash says, “To be totally honest, it’s other people’s turns. This is an ensemble show, and it’s not going to be about Gretchen’s struggle every season… Other people have some intense stuff to deal with, and both Aya and Gretchen are there to support that this season.”

Another little detail about this upcoming season– almost all of Episode 2 will involve Lindsay dressed up as a sexy nurse. 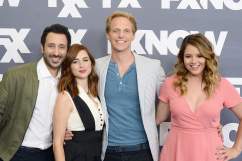