Angelina Jolie has filed for divorce from Brad Pitt, TMZ reported on September 20. According to the site, she cited irreconcilable differences and wants physical custody of their six children. She only wants to give Pitt visitation and doesn't even want a judge to grant him joint physical or legal custody.

TMZ's sources say that it has to do with their way Pitt is parenting them and she doesn't like his methods. There is no "third party" involved and she lists September 15, 2016 as the date of separation.

The couple have been married since August 2014, but they have been a couple since 2004.

Click through for photos of the two together in happier times. The above photo shows their last red carpet appearance together to promote By The Sea, a film Jolie directed that starred both of them. (Getty) 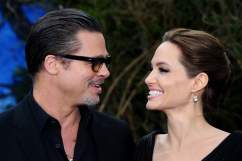