While Bridget Jones' absence from the big screen was longer, Zellweger herself hasn't been in a movie since 2010's My Own Love Song. This year, she also made The Whole Truth, a legal drama with Keanu Reeves that is scheduled for October. Zellweger has an Oscar win for Cold Mountain and was nominated for an Oscar in 2002 for Bridget Jones's Diary. In the new film, Bridget has come to terms with her single life and is a TV news producer.

Peter Travers of Rolling Stone gave the film three out of four stars. "Who's the father? Don't let it worry you. Zellweger, Firth and Dempsey make a merry go of it. Better yet, it's Bridget who decides her own fate, pretty revolutionary for rom-com. Sweet," Travers wrote. (Getty) 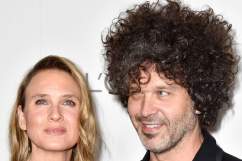