It's dangerous times for the Brooklyn Nine-Nine team in season four, especially for Jake (Andy Samberg) and Holt (Andre Braugher). At the end of season three, it was revealed that they have moved to Coral Springs, Florida, where they live under witness protection after mob boss Figgis threatened them. Holt is now known as Greg and Jake is Larry. The season four premiere kicks off a three-parter titled "Coral Palms."

While Holt and Jake are in Florida, the rest of the team is stuck holding down the fort. Terry Crews, Stephanie Bratriz, Melissa Fumero, Joe Lo Truglio and Chelsea Peretti also star in Brooklyn Nine-Nine. There will also be a few new faces that will make Saturday Night Live fans happy.

Click through for a look at the new cast joining Andy Samberg and Emmy nominee Andre Braugher. The season premiere airs at 8 p.m. ET on Fox. (Ray Mickshaw/FOX) 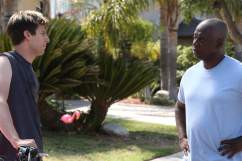 ‘Brooklyn Nine-Nine’ Season 4 Premiere: What Time & Channel Is the Show On?

Read More
Andy Samberg, FOX, TV
The fourth season of Fox's Brooklyn Nine-Nine kicks off tonight with Holt and Jake in Witness Protection. Click to see who's coming back and joining the show.