On Real Housewives of New York the focus of this season has been primarily Luann De Lesseps’ relationship with her fiance Tom D’Agostino. When D’Agostino was outed as having made out with a woman at a Manhattan hotel just before his engagement party with De Lesseps, it caused major upset within the RHONY group. De Lesseps chose to forgive her man and Bethenny Frankel seemed to be made the villain in that situation as she was the messenger. When De Lesseps talked to the public about her forgiving her man D’Agostino, she wrote in her Bravo blog:

It took me some time to pull myself together after the initial shock. My gut reaction was to think about how this looked to my friends and family, and it wasn’t until I had time to think that I began to understand what I was feeling. We all make mistakes, and some we make in private and others we make for the world to see. After I found out about what Tom had done, I had to dig deep within myself to find the love to forgive, but I did. I forgave him shortly after reuniting back in New York. Was it easy? No way. Am I glad I did? Absolutely. We are still engaged and are finalizing our New Year’s Eve wedding plans. He’s a good man and we love each other. We will stand the test of time regardless of what those women try to do to ruin our happiness.

So, who was the woman that D’Agostino cheated with? According to The Inquistr, the 52-year-old Playmate was Deborah Driggs, as first reported by All About the Tea. The two reportedly keep in contact and see each other from time to time. The Inquistr states that their last “get-together” was at the L.A. Montage Hotel in May 2016 and the two supposedly first met in 2009.

According to Blasting News, Driggs married a gymnast named Mitch Gaylord in 1992 and they had three children together (Kevin Tyler, Madeline Rae, and Bailey) before divorcing in 2003. In her career, Driggs appeared in a couple movies and served as Playboy’s Playmate of the Month in March 1990. Currently, she is reported to be selling life insurance.

For more information on Driggs, check out her best Instagram photos in the gallery at the top of the page. 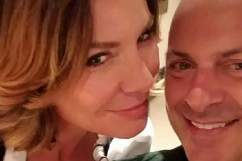