Meet the 8-year-old transgender actor who is primed to capture the hearts of Modern Family audiences. On September 28, 8-year-old Jackson Millarker will star in an episode of the hit ABC sitcom. The show is titled “A Stereotypical Day,” and will feature Millarker playing a character named Tom who befriends Mitch and Cam’s daughter Lily.

1. The Episode’s Director Says Working With Millarker Is One of the Reasons She Loves Working on the Show

Director Ryan Case wrote on her Instagram page in introducing Millarker to the world, “This is Jackson Millarker. He’s 8 years old, from Atlanta, and just happens to be transgender. He plays Lily’s friend Tom in this week’s Modern Family and he’s wonderful. One of the many reasons I love being a part of this show.” Shortly after the story went viral, Case switched her Instagram profile to private.

On her IMDb page, it says that Case has directed seven episodes of Modern Family but has worked as an editor on nearly 80. The episode that will feature Millarker was written by Vali Chandrasekaran and Steven Levitan.

2. Millarker Got His Start Through a Go Fund Me Page

Millarker’s mother, Stacey, helped Jackson get his start in acting by setting up a now-deleted Go Fund Me page. The story on the page simply reads, “Donate money to help fund Jackson’s acting career!” The page raised $452, the original goal was $200. Stacey Millarker said that Jackson’s grandparents were among the donators. Another update on the page said that the family needed more donations as “Uber and Lyft are really expensive!”

3. His Mothers Are Both Teachers

One of Millarker’s mothers, Jen, studied at Georgia Gwinnett College, majoring in Special Education, according to an online profile. The clearly outdated profile adds that Jen Millarker is, “Mama to two young daughters who are constantly inspiring her to be amazing.” It adds, “As a parent and future educator, she truly enjoys working with the children at the studio and experiencing the joy of each child creating their own unique piece of art.” According to her Facebook page, Jen Millarker works at the Globe Academy, an alternative school that strives to make children bilingual.

On her LinkedIn page, Stacey Millarker says that she works as an art teacher in the Dekalb County School system.

They also teach an art class at a Hippy Camp. The web page for the class reads, “Groovy! Come chill out with Zone of Light for Hippie week! We will travel back in time to create some fun artwork, tie dye shirts, and even create your own lava lamp!”

4. His Family Live in Georgia’s ‘Most Liberal City’

Clarkston, Georgia- the most diverse square mile in AmericaWhen most people consider refugees, some may get confused with immigrants or only think of refugee camps in various war torn areas of the world. But, a refugees is someone with if fleeing from religious, social, or political persecution because of their faith, race, etc. Down in Clarkston, Mission to the World is working within…2014-02-17T17:00:04.000Z

The Millarker family live just outside of Atlanta in the suburb of Clarkston. The motto of the town is “Where Possibilities Grow.” Georgia blog Flagpole named it the “most liberal city” in Georgia, after the city passed a significant marijuana ordinance. The posting reads, “The city became a favorite landing spot for refugees, who find housing in the large number of apartment complexes that have sprouted up, and Clarkston is now considered the most diverse municipality in Georgia.”

5. Jeffrey Tambor Asked for More Transgender Actors to be Given Chances in his Emmy Acceptance Speech

During his Emmy acceptance speech earlier in September 2016 for his role in Transparent, actor Jeffrey Tambor said, “I would not be unhappy if I were the last cisgender male to play a female transgender on television.” The Variety report on Millarker’s groundbreaking role also mentions other transgender actors working on shows such as Orange Is the New Black and Nashville. As well as Jazz Jennings’ TLC reality show, I Am Jazz. 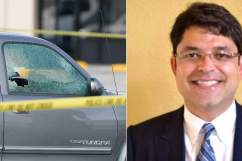