DEFYING THE NAZIS: THE SHARPS’ WAR | Trailer | PBSPremieres Tuesday, September 20, 2016 at 9/8c on PBS. DEFYING THE NAZIS: THE SHARPS’ WAR, co-directed by Ken Burns and Artemis Joukowsky, is about a little-known but important mission by an American minister and his wife to rescue refugees and dissidents in Europe before and after the start of World War II. Join the conversation…2016-08-12T21:00:01.000Z

On the brink of World War II, Martha and Waitstill Sharp left the comfort of their Massachusetts home to travel to Europe and save those fleeing Nazi persecution. Tonight, PBS’s new documentary, Defying the Nazis: The Sharps’ War, directed by Ken Burns and Artemis Joukowsky, will chronicle the perilous journey the Sharps’ took, and the lengths they went to save hundreds of Jewish refugees who hoped to flee the dangers of Nazi occupation.

Read on to learn more about Martha and Waitstill Sharp.

1. Waitstill Was a Unitarian Minister

DEFYING THE NAZIS: THE SHARPS’ WAR | Ken Burns | PBSPremieres Tuesday, September 20, 2016 at 9/8c on PBS. Defying the Nazis: The Sharps' War tells the story of Waitstill and Martha Sharp, an American couple who boldly committed to a life-threatening mission in Europe. Join the conversation with #SharpsWarPBS.2016-08-11T15:00:03.000Z

Waitstill Sharp was a minster in the Unitarian Church in Wellesley, Massachusetts. His wife, Martha, was an accomplished social worker.

Waitstill, born in May 1902, was the son of an author and professor. He graduated from Boston University, Harvard Law School and Harvard University (for his MA). During his third year of law school, Waitstill became the part-time director of religious education at Second Church, and was later named the National Director of Religious Education for the American Unitarian Association.

Martha, meanwhile, graduated from Pembroke College. Her devotion to service led her to Northwestern University’s Recreation Training School, and she eventually became the Director of Girls Work for the Chicago Commons for about 500 women.

The Munich Agreement | History LessonsThis video is part of History Lessons, a series dedicated to exploring historical events and examining their meaning in the context of foreign relations today: http://www.youtube.com/playlist?list=PLF2F38E5941910270 The Munich Agreement is one of the most criticized diplomatic agreements in history. In 1938, Adolf Hitler turned his sights on absorbing the Sudetenland, the part of Czechoslovakia dominated…2012-09-26T20:02:18.000Z

In 1938, the Munich Pact gave the Sudetenland (an area of Czechoslovakia with a large ethnic German population) to Germany in exchange to a peace pledge from Hitler. According to the United States Holocaust Memorial Museum, Robert Dexler (the director of the American Unitarian Association, also known as AUA) is reported as saying, “I knew there would be untold suffering in the Nazi-occupied territories, and I was equally convinced that something should be done about it by those of us who felt we had an obligation to aid our friends who had been so betrayed.”

After the agreement was signed, the AUA dedicated themselves to helping refugees in Czechoslovakia. One night, Waitstill received a phone call from his good friend, Rev. Everett Baker, the Vice President of the AUA, asking if he and Martha would help provide relief to those escaping the Nazis. According to the documentary’s website, “The mission would involve secretly helping Jews, refugees and dissidents to escape the expanding Nazi threat in Europe.”

3. They Left Their Two Children in the Hands of the Parish

In order to travel to Europe, the couple was forced to leave their two young children behind to ensure their safety. In the words of Harvard Square Library, Martha and Waitstill had “grave misgivings” about leaving their children (Hastings, 7, and Martha Content, 2) in the hands of the church. However, they did trust that leaving them in the “capable” hands of Dr. Baker and the church was their best option if they were to help those fleeing persecution.

4. They Faced Torture and Death If Caught

Two Who Dared to Save OthersWatch more and discuss: http://stamford.itsrelevant.com/content/13918/two-who-dared-to-save-others In 1939, seventeen ministers said "no" to a volunteer relief effort in Europe, led by the Unitarian Association. The Sharps, however, were the ones who said "yes." At the onset of World War II, Waitstill and Martha Sharp travelled to Czechoslovakia. What started as an aid operation for refugees soon…2013-04-05T19:04:18.000Z

According to the documentary’s website, Waitstill and Martha faced “imprisonment, probable torture and death” if discovered. For this reason, many other members of the church refused to involve themselves in the mission.

Despite the dangers, Waitstill and Martha, motivated by “their faith and their moral outrage“, agreed to travel to Europe and assist the cause. The Sharps’ helped in the relief effort by registering refugees, bringing applicants to embassies, finding the scholarships or employment for emigration, securing releases from prisons, and arranging travel to safer destinations. In one brave mission, according to the United States Holocaust Memorial Museum, Martha successfully escorted 35 refugees to England. Among them were journalists, political leaders, and two young children whose parents had committed suicide. PBS’s documentary will interview some of the now adult children the Sharps’ saved.

PBS to Air Film About the Americans Who Saved Jews From NazisPBS plans to air a feature-length film later this year about an American couple who rescued Jews from Europe during World War Two. The movie will tell the true story of Waitsill and Martha Sharp, who risked their own lives to save hundreds of people in 1939 and 1940. Tom Hanks will lend his voice…2016-05-24T17:52:39.000Z

For over two years, Martha and Waitstill led perilous journeys in Europe, doing whatever they could to help those fleeing from the world of Nazi oppression. During this time, they narrowly missed capture and arrest by the Nazi police, but were able to bring dozens of scientists, journalists, and doctors to safety.

In the words of the documentary’s website, “To recognize their heroic sacrifice, Martha and Waitstill were honored at Yad Vashem in Israel and declared ‘Righteous Among the Nations.’ Of the thousands so honored, there are only five Americans, including the Sharps.” 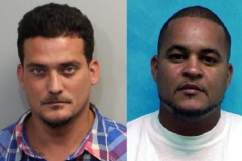 Read More
PBS, Tom Hanks
Waitstill and Martha Sharp are the focus of PBS's documentary, Defying the Nazis: The Sharps' War. Learn how the couple saved hundreds of refugees from Nazi persecution.