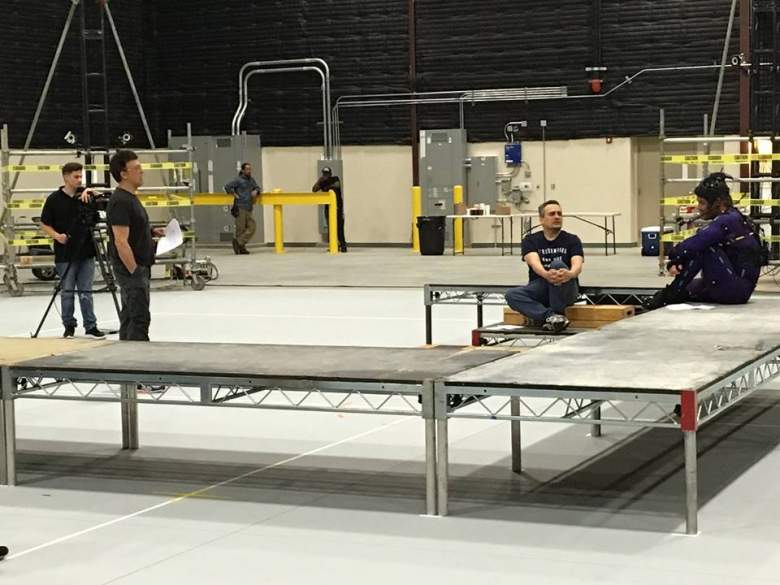 Joe and Anthony Russo, the directors behind Captain America: The Winter Soldier and Captain America: Civil War, posted the above photo on their Facebook page today, showing Oscar-nominated actor Josh Brolin in a motion capture costume. The No Country For Old Men star plays Thanos in the Marvel Cinematic Universe.

Thanos was first seen during the mid-credits scene in the first Avengers movie, with Damion Poitier playing the character. Brolin made his debut in the role in Guardians of the Galaxy and it looks like the rest of the Marvel superheroes will finally meet the super-villain. Brolin also played the part in a mid-credits scene in last year’s Avengers: Age of Ultron.

The Russo Brothers didn’t reveal much of course. They just wrote “Rehearsal” in the caption for the photo. On August 14, they announced that filming on Infinity War was about to start by posting a photo of an airport board that read “Destination: Atlanta, GA.”

Infinity War was originally announced as a two-part movie, but the second half was renamed Untitled Avengers Film (temporarily) and Part I was dropped from Infinity War‘s title.

“The movies are two very different movies,” Joe Russo told Uproxx in May 2016. “The intention is we will change it, we just haven’t come up with the titles yet. But, yes, we will change it. And, yes, that is a scoop: we will retitle them.”

In an interview with The Independent last week, the Russo Brothers said that Infinity War is a “culmination of everything that’s happened” so far in the Marvel movies. They explained:

Without getting too specific with the surprises that the movies hold, we very much think of these [next two Avengers films] as a culmination of everything that’s happened in the MCU. And in some respects, they’re going to be the end of some things and the beginnings of certain things. And there’s a big catharsis that happens in these movies in terms of what the MCU is and how it is formed.

In that same interview, they said they are “absolutely” excited to have Thanos in the new film. They are also excited to finally work with Mark Ruffalo and Chris Hemsworth, who didn’t get to be in Civil War as the Hulk and Thor, respectively.

Infinity War opens on May 4, 2018. The next time Marvel heroes will be on the big screen is in Doctor Strange, which opens on November 4, 2016.

Update: This piece was edited to note that Thanos also appeared at the end of The Avengers (2012).