Comedian Jim Carrey is facing a wrongful death lawsuit in the death of Cathriona White, who committed suicide in September 2015. The lawsuit was filed on September 19 in California Superior Court in Los Angeles County. Carrey has called the lawsuit a “terrible shame.”

News of the lawsuit was first reported by attorney Daniel Wallach. Burton’s attorney, Michael Avenatti, also tweeted about the lawsuit.

We will also be requesting that the Los Angeles DA's office launch an investigation into Jim Carrey's role in the death of Ms. White.

The lawsuit, filed by White’s husband, Mark Burton, says that Carrey obtained prescription drugs illegally under a fake name for White, even though he was aware that White was “ill equipped to ingest and manage highly addictive prescription drugs outside the care of a licensed physician” and that she was “prone to depression.” The lawsuit says that Carrey used the fake name “Arthur King” when obtaining the drugs.

“This is a case about Defendant Jim Carrey using his immense wealth and celebrity status to illegally obtain and distribute highly addictive and, in this case deadly, controlled substances,” the lawsuit begins.

White was 30 years old at the time of her death and the couple broke up just days before her death on September 24, 2015. The lawsuit says that Burton was living in Portland, Oregon when White died.

According to the lawsuit, Carrey gave the drugs to White on September 21, 2015, three days before her death. Citing the autopsy, the lawsuit says that Percocet (Oxycodone), Ambien and Propranolol were both found in White’s system.

The lawsuit, which can be read in full below also says that Carrey worked to cover up any connection to White’s death. It says that he sent a “bogus text message” on September 27, 2015, three days after White’s death, “pretending as though he had misplaced the Drugs and insinuating White may have taken them from Carrey without his knowledge, when in reality Carrey knew full well that he had voluntarily and illegally provided the fraudulently obtained and prescribed Drugs to White days prior.”

Earlier in the lawsuit, it says that Carrey had an “obsession with controlling and manipulating” White, so he had “the ability to monitor surveillance cameras on a home White often stayed at and was able, by design, to view the residence remotely to keep track of White’s comings and goings.”

The lawsuit calls Carrey’s claim that he was unaware of White’s drug use “absurd” because if Carrey thought White took drugs from him and did not contact him for days, “then why would Carrey not immediately request law enforcement to check on her well-being after she did not return his text?” The lawsuit says that Carrey “further continued his charade by publicly offering to pay the funeral expenses associated with White’s funeral in Ireland.” However, Carrey “never paid a dime of funeral expenses,” the lawsuit says.

“White’s death was tragic and easily avoidable,” the lawsuit reads. “It has had a debilitating and devastating effect on White’s family and friends.”

Burton is seeking general damages, funeral and burial expenses and attorney’s fees. The lawsuit also asks that all of Carrey’s assets be seized, “including his Gulfstream V private jet, in order to provide for satisfaction of the likely award.”

The lawsuit was filed two months after The New York Daily News reported on the contents of White’s suicide note. It was addressed to Carrey and signed “Dewdrop,” the Daily News reported. “I’ve spent 3 days now in disbelief that you’re not here. I can go on brokenhearted and try to put the pieces back. I could, I just don’t have the will this time. I’m sorry you felt I wasn’t there for you. I tried to give you my best part,” the note read, according to the autopsy.

Carrey issued the following statement to The Hollywood Reporter:

It would be easy for me to get in a back room with this man’s lawyer and make this go away, but there are some moments in life when you have to stand up and defend your honor against the evil in this world. I will not tolerate this heartless attempt to exploit me or the woman I loved. Cat’s troubles were born long before I met her and sadly her tragic end was beyond anyone’s control. I really hope that some day soon people will stop trying to profit from this and let her rest in peace.

Here is our response to the recent nonsense from the Carrey spin team. https://t.co/AcTlgQWuH9 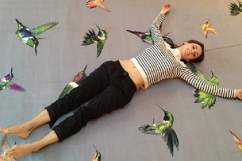