There isn’t much for the Star Wars fan from Marvel this week. On Wednesday, September 14, the publisher is only releasing a single book from Star Wars, the fourth issue of its The Force Awakens adaptation.

Marvel’s adaptation of the latest Star Wars film is a six-issue miniseries written by Chuck Wendig, the author behind Star Wars: Aftermath and its sequel, Star Wars: Life Debt. Unlike the adaptations of the original films and the prequels, The Force Awakens adaptation didn’t start until long after the film was out of theaters, so there is little surprise. In addition, the adaptation is based on the final script, so there haven’t been any surprise deleted sequences in the series so far.

The first two issues were drawn by Luke Ross, who returns for issue 4. Marc Laming sat in for Ross for issue 3. Issue 4 picks up with Rey in Maz Katana’s castle, as she discovers Luke Skywalker’s lightsaber. You can click here for a preview of the issue to see how Ross and Wendig present Rey’s Force vision.

While there are no other Star Wars books from Marvel this week, readers should still chekc out the sixth issue of Ta-Nehisi Coates’ excellent Black Panther series. Civil War II #2 also hits stores this Wednesday. 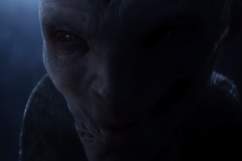