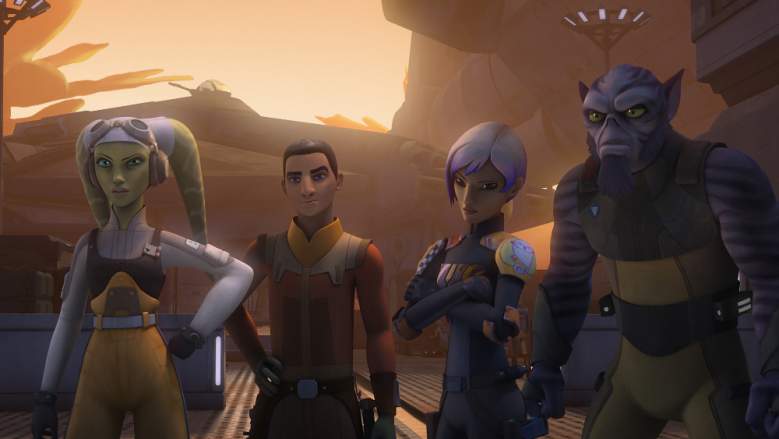 The third season of Star Wars Rebels introduces a new threat to the Rebellion, Grand Admiral Thrawn. “Steps Into Shadow” marks Thrawn’s first appearance in the new Star Wars canon. Thrawn is an expert military strategist who was introduced in Timothy Zahn’s Heir to the Empire. While that story and all of the previous stories featuring Thrawn are no longer canon, the character remains too popular to not be used by Disney and Lucasfilm.

For those who’ve never seen Rebels before, click here to meet the main characters. The show began in 2014 and is set five years before the events of Star Wars: A New Hope and airs on Disney XD.

Read on for a recap of the action-filled episode.

The episode opens with Erza, Zeb and Sabine infiltrating an Imperial base, with Zeb praising Ezra for the plan. Chopper assists with opening the door and we learn that they are breaking out the infamous pirate Hondo, who has some important information for the Rebellion. It seems like no matter how hard the Ghost crew tries, Hondo always comes back into their lives.

Ezra is happy to see Hondo, but Sabine and Zeb don’t care for him. It turns out that Hondo has a friend with him, an Ugnaught who also has some helpful info. During the escape, they encounter some trouble with Stormtroopers as Ezra leads them out. Ezra shows off some fancy footwork with a new green lightsaber. Sadly, the Ugnaught gets impatient, runs ahead and is killed by an AT-DP. Ezra ends up using the Force to control the AT-DP pilot to kill the other Stormtroopers on the landing pad. It’s a bit scary, and Zeb and Sabine know it’s wrong. “When did Kanan teach you that?” Sabine asks. “He didn’t,” Ezra responds.

Hera swoops in to save the team. On the ship, Hera isn’t happy with Ezra failing to mention that the Ugnaught was an important part of the mission. Ezra storms off and goes to his cabin, where he has stowed the Sith Holocron. Ezra has clearly built a relationship with the Holocron and it’s a dangerous one. Ezra insists he will never let his friends get hurt again, even if it means learning to use his anger.

Meanwhile, on an Imperial Star Destroyer, Grand Moff Tarkin meets with Governor Price. She wants the Seventh Fleet to help her stop the Rebel Insurgents and he grants her wish.

Lieutenant Commander Ezra Gets to Lead a Mission

In Chopper Base on Atollon, Hondo tries to secure payment for his information, even though the Ghost team just saved his skin. The Rebels agree to give him a ship if the information is good enough. It turns out that the info is a map to Reclam Station, a secret Imperial shipyard where they are dismantling old Y-Wings. The Rebels want Ezra – now a lieutenant commander – to lead a recon mission to the shipyard.

Elsewhere, Kanan, now blind, is meditating and hearing someone tell him to come. Hera tells Kanan that Ezra blames himself for what happened to him and Ahsoka Tano on Malachor (during the season two finale). Kanan decides to speak with Ezra and is not happy with Ezra using the Sith Holocron. Ezra says he’s learning how to win battles using the Holocron, which Kanan insists is no good. Kanan takes it away and Ezra says he doesn’t need it and he doesn’t even need to learn from Kanan either.

As the Phantom heads towards the Imperial base, Kanan is answering the call he has heard during his meditation. The Ghost team learns that they are trespassing in Mining Guild Space and need to pay a toll to go through Hyperspace.

Back by Chopper Base, Kanan follows the Force to a mysterious creature. It’s Bendu, a Force-sensitive creature who is neither on the Dark nor Light Side of the Force. He exists somewhere in the middle.

Kanan Learns to See Through the Force

The Phantom team engages the Mining Guild fighters. Ezra wants Sabine to kill the other Mining Guild pilots, but that’s not the plan. He reluctantly agrees to let them live and they go into Hyperspace.

During his meeting with Bendu, Kanan learns that a single object like a Sith Holocron can’t control a person’s destiny. Bendu tells him that people can control their fates from within. Bendu also offers to help Kanan learn to see. His eyes can’t be healed, but he can learn to use the Force to see.

Back at the Imperial Fleet, Thrawn meets with Tarkin, Price and Kallus. Tarkin correctly predicts that the Lothal Rebels plan on raiding the secret Imperial shipyard.

On the way to Reclam Station, the Phantom team spots the Empire destroying Y-Wings already. Ezra clashes with Captain Rex and Zeb, who remind him that they were only on a recon mission. He blindly rushes the team in without a plan and Hondo finally tells them that there are dismantling droids patrolling the station. Rex tries to destroy the droid attacking the Phantom, but when the Phantom gets hit, Sabine loses control. They fall off Imperial scanners by going into the storms. Chopper restores power to the ship in the nick of time, allowing Sabine to get the ship out of the storm and lock onto the station.

The Imperials think that the Phantom crashed, but that’s not the case. They watch as Y-Wings are turned to scrap heaps, and the team decides that they need to shut down the conveyor belt. Thank to Hondo’s ability to speak Ugnaught, he asks the Ugnauts to shut down the belt. While that works, Ezra forgets that the Y-Wings will have to be refueled.

The Recon Mission Turns Into Something More… Complicated

Back on Atollon, Bendu teaches Kanan how he can “see” without physical vision. “You must be empty. There is only the Force,” he tells Kanan. Kanan is obsessed with a fear of the spiders on the planet. Bendu teaches Kanan how to understand the spiders and understand why they attacked in the past. While looking inside the mind of the spider, he realizes that they see him as someone full of fear, grief and anger. It’s also how he sees himself. Kanan learns that he has distanced himself from everyone else. “If you can see yourself, you will never be truly blind,” Bendu tells Kanan, who realizes that he needs to help Ezra and his friends. As for the Sith Holocron, he gives it to Bendu as a “gift.” Kanan walks away and laughs.

Meanwhile, Sabine and Zeb work quickly to refuel the bombers and Ezra and Rex go to the control tower so they can leave. Unfortunately, a dismantling droid gets in the way and makes Sabine and Zeb’s work impossible. Rex runs back and Ezra insists that he can take care of the tower. At Chopper Base, Hera and Kanan rush off to the station to help Ezra and the team.

Back at the station, Rex successfully gets rid of the droid, saving Zeb and Sabine. In the control tower, Ezra quickly dispatches the stormtroopers and asks the officer to restore the controls to the Y-Wings. Unfortunately, the station’s entire power has to be turned off. Ezra thinks his friends can leave before the station crashes into the planet. Chopper can remotely fly the other Y-Wings, while Zeb, Sabine and Rex fly three others. Ezra plans on using the Phantom to escape.

The Y-Wings’ Hyperdrives have all been removed and a Star Destroyer just arrived. Oh, and the Phantom fell off the station and crashed. Ezra is still on the station.

Thrawn Is Playing the Long Game

Just in the nick of time, the Rebels and Ghost arrive to pick up the Y-Wings. Ezra is still on the planet below, falling with the station. In a scene that recalls the moment in The Empire Strikes Back when Leia picks up Luke, Kanan senses where Ezra is. Kanan tell Ezra to let go of the station and to trust him. As the station continues to fall, Ezra lets go and Kanan saves him just before the station’s destruction.

On the Star Destroyer, Price talks with Thrawn, who lets the Rebels escape. One of the other officers is puzzled, but Price explains that Thrawn is thinking about the long game, not about stopping a single Rebel cell.

Back at Chopper Base, Hera suspends Ezra’s command after the botched mission. As for the Y-Wings, they will be delivered to General Dodona. (He’s the general who leads the Rebels at the Battle of Yavin.) Hera explains that their cell is just a part of a larger Rebel Alliance being built to face the Empire. Meanwhile, Ezra apologizes to Kanan for not tell him him about the Sith Holocron, which Kanan says is now “safe.” The episode ends with Ezra thanking Kanan for saving him.

‘Rebels’ Takes a Major Step Forward Setting Up the Future

While the season two finale of Rebels delved deep into Force mythology, “Steps Into Shadow” was more about putting pieces together for the Rebel Alliance. We’re starting to see that the Rebel cell that sprung from the Lothal sector is just one piece of the budding Alliance. It’s about time that Dave Filoni and his team start telling that story. On the flip side though, the Empire is also learning about the growing Alliance, or at least Thrawn is. Kanan and Ezra also have to rebuild their master-apprentice relationship, since it seems like the two didn’t do much talking after Malachor.

The next episode of Rebels, “The Holocrons of Fate,” airs on October 1. 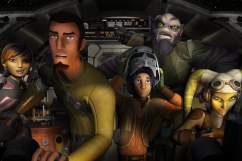