Star Wars Rebels kicks off its third season on September 24, providing us with more Star Wars adventures while we eagerly await the release of Rogue One in December. The new season will continue the story of Ezra Bridger, Kanan Jarrus and the rest of the Ghost crew as they continue working with the fledgling Rebellion in their fight against Darth Vader and the Galactic Empire. The series takes began five years before Star Wars: A New Hope and has succeeded in bridging the world of the Prequels to the Original Trilogy. Piloted by executive producer Dave Filoni, the series also builds on themes and characters introduced in The Clone Wars and explores uncharted territory when it comes to the Force.

Rebels' second season finished with one of its best episodes and possibly one of the best pieces of Star Wars media outside the movies. Ezra, Kanan and Ahsoka Tano went to Malachor to discover the secrets of the Sith in hopes of destroying them. When they reached a Sith Temple with the help of Darth Maul, they faced off against three Inquisitors and Darth Vader himself. In the end, they obtained a Sith Holocron, but they inadvertently provided Maul with a ship to leave the planet and it appears that Vader killed Ahsoka... or did she just become one with the Force? We'll have to watch to find out.

In the meantime, click through to meet the main cast and characters of Rebels. (Photo by Lucasfilm via Getty Images) 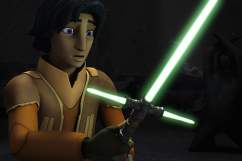