Taking Fire is a new Discovery Channel show that follows four U.S. soldiers during the Afghanistan War. The five-episode documentary series begins on the network Tuesday, September 13 at 10 p.m. ET. Read on to learn more about the show.

The footage used in Taking Fire was recorded in 2010 and was made using footage from body and helmet cameras worn by Kyle ‘Bobby’ Boucher, J.J. McCool, Kyle Petry and Ken Shriver. They were members of the 101st Airborne and deployed to the dangerous and isolated Korengal Valley, the same area where the 2010 Oscar-nominated documentary Restrepo was made.

“As we show in the first episode, some live and some don’t,” Discovery Channel president Rich Ross told the Wall Street Journal of the show. “This is not Steven Spielberg.”

CHANNEL: Discovery Channel (To find out what channel Discovery is for you, you can click here and change the Provider.) 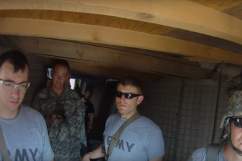