After The Voice, NBC will debut its newest comedy, The Good Place. It's a unique idea from Michael Schuer, the co-creator of Parks and Recreation and Brooklyn Nine-Nine, who also co-developed the U.S. version of The Office with Greg Daniels. His newest show is a departure from those workplace comedies and has a fantasy element.

The Good Place finds Veronica Mars and Frozen star Kristen Bell as Eleanor Shellstrop, who is killed by a tractor-trailer carrying erectile dysfunction products. However, she wakes up to learn that she's in the "good place" (a.k.a. Heaven) and learns that she's there by mistake. She was supposed to go to the "bad place" and everyone in "the good place" thinks she's someone else.

Although the first two episodes air Monday at 10 p.m. ET after The Voice, the show will be moving to Thursdays after Superstore.

Click through for an introduction to the main cast. (Justin Lubin/NBC) 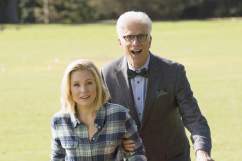 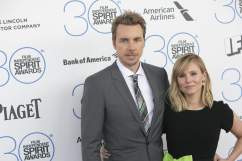