Michelle Obama stopped by The Ellen DeGeneres Show to co-host the Tuesday, September 13 episode. Warriors star Steph Curry stopped by, as did actor Bradley Cooper in a surprise appearance. Although the show doesn’t air until the afternoon, DeGeneres’ team uploaded most of it online already, so you can watch it right here.

After introducing Obama to the audience following her monologue (seen above), DeGeneres sat down with the First Lady to discuss what she will miss about being in the White House and what she hopes will be her legacy. Obama said she will miss the people the most and wants to continue making memories for her daughters, Malia and Sasha.

“One of the things I know from sitting in this position, that every First Lady feels some level of pressure,” she said. “I mean, this is a big platform and you don’t want to mess it up. So I wouldn’t dare compare my experience to any former First Lady, but I do take the role seriously. As I said in my convention speech, I know that kids are watching us. They’re watching what we say, what we do and Barack and I have tried to make sure what kids are seeing is something that they can be proud of because it matters.”

Curry also recalled that time he played golf with President Barack Obama and the trash-talking tips he received from the First Lady.

The big surprise for the episode was Bradley Cooper, whose appearance was not previously announced. 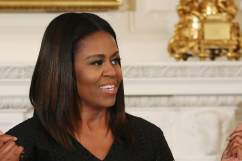