Millions of fans have been tuning in to check out Rob Kardashian and Blac Chyna’s show Rob & Chyna, following the tumultuous relationship of the couple. One of the biggest questions that viewers seem to have is about the couple’s net worth. While Rob has an estimated wealth of $6 million, he always appears on the show as being in need of financial assistance from his family. As for Blac Chyna, her fortune is reported at $3 million. For all the details on how the couple makes their money, legal woes and more, read on below.

1. Kris Jenner Helped Her Son Get His Home

https://www.instagram.com/p/BJx7C2LBXRc/?taken-by=blacchyna&hl=en
When Rob Kardashian got his house this past year on Keeping Up With the Kardashians, his siblings gave their mother a lot of heat for helping Rob out, telling her not to give him money for a down payment. On the show, we watched as Jenner and her friend Faye Resnick decorated and furnished Rob’s home. And, Jenner even brought him groceries on occasion.

Rapper Tyga, aka Kylie Jenner’s on-and-off boyfriend, is also the baby daddy of Blac Chyna’s only son King Cairo Stevenson. Two months ago, Hollywood Life reported that Tyga had a bench warrant out for his arrest over unpaid rent. An insider then told the site that:

Blac and Tyga are on good terms because of King Cairo, but if he winds up in jail, that’s going to be just the beginning of his problems. He has to pay her child support and she’s expecting it from him regardless. If she has to go to court and force a judge to sell his valuable possessions, she will. 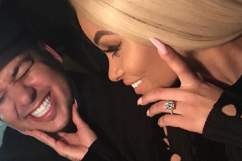 3. After Kim Kardashian’s Armed Robbery, the Couple Is Allegedly “Flaunting” Their Wealth Online

Last week, Kim Kardashian was bound, gagged and robbed at gunpoint in Paris, with millions of dollars in jewelry stolen. Rob and Blac Chyna have received criticism over showing off matching, diamond-studded watches so soon after the robbery, as Us Weekly reports the couple “flaunting” their new bling online. You can check out the video above. Do you think it’s in poor taste given Kim’s recent situation, or is it not really a big deal?

https://www.instagram.com/p/BKPHxEKBatM/?taken-by=blacchyna&hl=en
Rob Kardashian has his own sock line, Arthur George, which is available at his sisters’ DASH stores. You can also purchase their products online.

5. When Rob Wants to Start a New Clothing Line, Chyna Has Her Doubts

https://www.instagram.com/p/BJOj_4tBdsd/?taken-by=blacchyna&hl=en
On Rob & Chyna, Rob Kardashian talks to Chyna about opening up another clothing line, but Chyna has her doubts, telling cameras:

Rob needs to continue working on his health, his fitness, his sock business. And so for him to try to go get a big brand-new house and to start a new business is a little bit bizarre to me.