*UPDATE: Bratavio has been eliminated

Last night, finalists from Season 13 of X Factor UK took the stage to flaunt their musical talents, and their performances were good enough to draw in more than 1 million viewers than last year’s first live show. With a peak performance of 7.2 million viewers, fan-favorites like 5 After Midnight and Ryan Lawry sang their hearts out, and gave fans exactly what they came to see.

During Sunday’s live results show, Freddy Parker, Saara Aalto, and Bratavio were named as the bottom three. After 18-year-old Freddy Parker was named safe, Saara Alto sang ‘Alive’ for a chance to advance to next week, and Bratavio performed ‘The Only Way Is Up’. With 3 votes to 1, Bratavio was eliminated.

Hours before the live shows on Saturday, it was announced that Brooks Way, the brother-duo in Louis Walsh’s category, were suspended from the show because of allegations involving one of Josh’s ex-girlfriends. Viewers were shocked when the duo did not come on stage to perform in the UK Saturday night.

Meanwhile, rapper Honey G has sparked a national controversy. While some are fans of the bedazzled rapper, others have “branded the show a ‘joke’ and vowed never to watch it again after Sharon sent Honey G through to the live shows”, according to the Daily Mail. On Saturday, Honey G seemed to win over some fans with her performance of California Love, but it’s still too early to tell what her trajectory on the show will be this season. 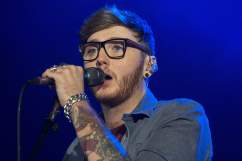