Share via E-mail Share on WhatsApp
Next Image: Dior & Vanity Fair With The Cinema Society Host The Premiere Of The Weinstein Company's "The Immigrant" - Arrivals

David Muir, 42, is a journalist and the current news anchor of ABC World News Tonight with David Muir. Muir previously worked as the weekend anchor for ABC World News Tonight, and the co-anchor of 20/20. And while Muir is widely recognized for the many Emmy and Edward R. Murrow awards he has received, we're not sure what his personal life is like. Does he have a girlfriend? Is he dating, married or single, or is Muir gay? Read on for details. (Getty) 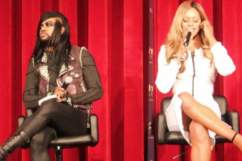