Mick Jagger (l), Keith Richards (c) and Charlie Watts (r) of The Rolling Stones may not even be the headliners at Desert Trip. (Getty)

Desert Trip, which is shaping up to be the biggest — or at least most lucrative — music festival ever, features a classic rock fan’s ultimate fantasy lineup. Paul McCartney, the Rolling Stones and Bob Dylan playing on the same bill would be good enough. But the festival known affectionately, if somewhat sarcastically, as “Oldchella” also stars The Who, Neil Young and former Pink Floyd bass player and songwriter Roger Waters.

The festival starts Friday, October 7, with gates opening at Empire Polo Grounds in the southern California desert town of Indio at 2 p.m., and the show getting underway shortly after sundown — which is 6:20 p.m. on October 7 — has earned its nickname. Not only is the six-night, two weekend festival taking place on the same site as the annual, hipster-friendly Coachella festival, the average age of the audience is expected to be 51.

But that would still make the ticket buyers considerably more youthful than the performers, who average a spry 72 years old.

If you’re heading down to Indio for Desert Trip, which runs October 7, 8 and 9 as well as October 14, 15 and 16 — or even if you aren’t — here’s what you need to know about the unprecedented show.

The stage is set. ? ? ? pic.twitter.com/zTV0mwkMCC

Like most rock festivals in recent years, Desert Trip will issue wristbands rather than paper tickets to concertgoers. But even though fans were informed as far back as May that the festival was sold out — and that a second weekend for what had been planned as a three-day event was added, and that was sold out, too — the truth is that passes to “Oldchella” are still available.

In fact, if budget isn’t an issue, the supposedly “sold out” festival is selling passes on its own web site, DesertTrip.com. Three-day passes for the second weekend, including shuttle tickets to transport fans to the concert from their hotels, were selling on the site for $424 as late as Friday morning, just a few hours before gates open.

A three-day pass to the standing pit, where fans can see every wrinkle on the faces of their rock ‘n’ roll idols, was also available for October 14-16, for the price of $1,599.

But tickets on the secondary market were also readily available and at much more reasonable prices — as low as $130 for a first-weekend pass on the ticket resale site StubHub.

2. Not Every Old Rock Star is Excited About “Oldchella”

#DesertTrip by the numbers: Everything you need to know about the artists playing at @DesertTripIndio! pic.twitter.com/OEXKVEWpXn

The show has also been labeled with the less-friendly nickname “Rockers With Walkers,” and at least one rocker from the 1960s generation that gave rise to the Desert Trip lineup — 46 years after that decade came to a close — is less than thrilled with the whole idea.

“The sound outdoors at that place is crap. The situation is crap. It’s a great story to be able to say, ‘I was there, I saw the Rolling Stones with Neil and everybody all at once.’ But it’s a lousy concert. You could give me tickets and I wouldn’t go,” Crosby, 75, told Britain’s Daily Mail newspaper. “Truth is, the whole thing is about merchandising. It’s a gigantic money machine, and I’m not in it for the money.”

Even so, Crosby said, he was not asked to be part of the “Rockers With Walkers” lineup but if he had, he “would have wanted to do it.”

3. The Desert Trip Lineup Has Recorded More Than 170 Albums

Listening to Bobby Lewis on the bus to @DesertTripIndio …… reading my favorite book of the moment! #DesertTrip pic.twitter.com/EZUi3zZAwX

Paul McCartney alone has issued 57 albums — as they used to be called in the days before digital streaming and downloads became the preferred method of buying and listening to music — in his solo career, as well as with his band Wings. That doesn’t even include the 12 albums he recorded with a band called The Beatles, who even some of today’s younger music fans may have heard of.

The six featured artists at Desert Trip have sold upwards of a combined 435 million records — just in the United States. That’s more than 1.3 records for every single person currently alive in the U.S.

Bob Dylan has recorded 37 studio albums and continues to produce new music even as he tours the world on what seem to be a constant basis.

Even the Rolling Stones have a new album, Blue and Lonesome, due for release in December, as frontman Mick Jagger himself noted on his Twitter account as he drove to Indio on Thursday.

Excited that #BlueAndLonesome will be released on Dec 2! Spotted this on the drive to the desert today. See you tomorrow #StonesDesertTrip pic.twitter.com/fvdYR5ZnTN 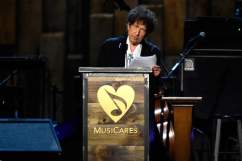 Bob Dylan Turns 75: The Tweets You Need To See

4. The Two Weekends Are Expected to Gross $160 Million

While Los Angeles-based Desert Trip promoter Goldenvoice — who also produce the annual Coachella alt-rock extravaganza at the same Empire Polo Grounds in Indio — won’t know the final cash intake until the second weekend is in the books, the projected $160 million haul is nearly double last year’s Coachella gross which set a new rick festival record with $84 million at the turnstiles.

“Everyone will make a lot of money, minus the fans who give a lot up,” one anonymous music industry insider told The Los Angeles Times.

5. Here’s the Schedule — Bob Dylan is the Opening Act

The times they are official.
Venue opens at 2pm. pic.twitter.com/9PZ8qkzRK8

Each of the six performers will play one complete set of more than two hours in length on each weekend, starting with Dylan on each Friday night.

Here’s the schedule of performers, which will stay the same on both weekends.

Mindful of their Baby Boomer audience, the promoters also offer stadium seating — not seen at the Burning Man-esque Coachella festival — and a full “culinary experience” with artisanal cuisine from top-rated chefs from across the country.

Any other questions — download the Desert Trip app available for both Apple iOS and Android devices. 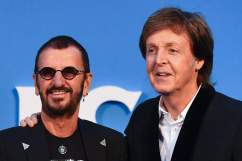