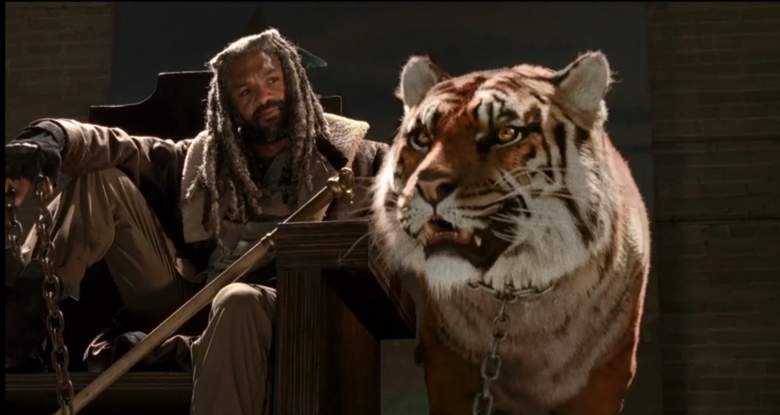 Ezekiel has just been introduced on The Walking Dead. And people already have a lot to say about him. Check out the best tweets and reactions to Ezekiel in this live recap for Episode 2 of Season 7.

This has spoilers through episode 2.

Carol was introduced to King Ezekiel in a very impressive scene. Shiva gave an impressive roar and Ezekiel introduced himself after Morgan gave her the briefest preparation for what she was about to see.

“I don’t know what the hell’s going on in the most wonderful way,” she said, taking on a new persona to help her survive, just like she did at Alexandria.

Here are some tweets about their introduction:

Slow unbelieving smile…
"I think you're amazing! I would be speechless, except I'm speaking."#TheWalkingDead#TWD

And then there was the special scene with the pigs:

Enjoy that pig, Saviors. Bellies full of rot and all. #TheWalkingDead

And this theory is great:

I wonder if the pigs are going to negan. #TWD #TheWalkingDead #taintedmeat

The Kingdom is a pretty amazing place. Morgan is training Benjamin. Carol’s adjusting (or more accurately, pretending to adjust). Really, the place seems too wonderful, and so far removed from what we saw in the last episode.

“Don’t think twice, it’s all right,” by Bob Dylan, is the song they were singing in the background while we got to see the Kingdom.

Carol is really good with pulling the wool over people's eyes. ?#TheWalkingDead

Fans are starting to think that if there’s an apocalypse, a Kingdom led by Ezekiel and his tiger Shiva would be the best place to be.