Gifty Louise has been voted off X Factor UK.

Last night, the contestants brought their A-game, and showed off some impressive vocal chops. Gifty Louise started out the evening with a pop performance to Fifth Harmony’s song, I’m In Love With A Monster. Sharon told her, “Gifty you are so sassy, so fantastic. I’ve been watching you progress, and you never put a step wrong. I don’t know the song, but I know now I love the song.”

Terry (as always) impressed the judges with his performance of Nina Simone’s I Put a Spell On You. Simon told him, “Matt, for me this is your best performance in the whole competition.”

Middlemas’ performance of Radiohead’s Creep also won over the judges. Simon told the teen, “That was magnificent. You sang with such emotion, with such heart.” With such impressive performances, it was difficult to say goodbye to anyone tonight. 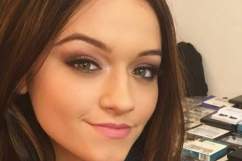