Tom Hanks is back in theaters this weekend with Inferno, the third film in the Robert Langdon franchise. Based on Dan Brown's fourth book starring the famous fictional symbology professor, the film takes audiences on a trip through Europe as Langdon tries to stop a virus that could decimate the world's population. Thankfully, Langdon has the help of Dr. Sienna Brooks, played by Felicity Jones.

The Langdon films haven't been critical successes for director Ron Howard, but they have been incredibly popular overseas. In fact, Sony already released Inferno in some markets and it has already grossed nearly $100 million before even opening in the U.S. The three movies in the series, including The Da Vinci Code (2006) and Angels & Demons (2009) have grossed a combined $1.33 billion worldwide so far.

Hanks needs no introduction, of course, but click through to meet the rest of the main cast, as well as a look at reviews of the film. (Jonathan Prime/Columbia Pictures) 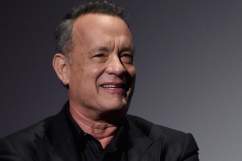 Tom Hanks’ Net Worth: 5 Fast Facts You Need to Know