Marilu & husband Michael reflect on how their marriage continues to beat the odds, courtesy of @theinsider: yhoo.it/1rGy1I4

Marilu Henner is paired up with Derek Hough on Dancing With the Stars, but her partner in life is husband Michael Brown.

The two knew each other for decades before they tied the knot as they knew each other in college at the University of Chicago. At that time, Brown was actually dating Henner’s best friend. For years, they lost touch with each other, but ran into each other when Henner was getting her marriage license with her first husband, actor Frederic Forrest. Henner had a crush on Brown for many years and the couple finally found love with each other. Brown and Henner have been married since 2006. Prior to marrying Brown, Henner was married to her ex Robert Lieberman for eleven years and Frederic Forrest for about two years.

During the course of their relationship, Brown actually battled cancer and Henner helped him through it. As a health-conscious vegan with a ton of background in nutrition, Henner was of great help to Brown, who had been urinating blood. According to the NY Post, his doctor had told it was “nothing,” but Henner felt something was wrong. It turned out that Brown had bladder cancer.

Brown ended up trying immunotherapy, which was a treatment that stimulated the immune system. Then, Brown ended up diagnosed with stage 1 lung cancer, which required surgery. When Brown came out of recovery for the surgery, he asked Henner to marry him and the couple has been together ever since that day. Brown has also been in remission for all these years.

Celebrating the release of Marilu's new book, "Changing Normal: How I Helped My Husband Beat Cancer." On Amazon & in book stores today! 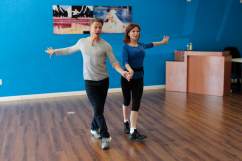 Derek Hough and Marilu Henner on ‘Dancing With the Stars’ 2016