Last week, Matt Terry wooed girls everywhere with his hip-thrusting, riff-filled, and super-sensual rendition of Heard It Through the Grapevine, and Terry’s success has got everyone wondering: what’s the deal with his love-life? When Matt originally auditioned for the show, he said that he had just been broken up with by his longterm girlfriend, and quit his job as a waiter to get away from everything. But ever since he made it through to the live shows, rumors have surfaced that Terry is back together with his ex, and only used the breakup as a sob story for the cameras.

On September 23, The Sun released an article saying Terry was back with his ex-girlfriend– in fact, the article claimed that he was “still living and sleeping with performing arts student, Jasmine,” when the show aired. A source who The Sun described as a close friend said, “Matt made a big thing about the fact he was a hopeless single and was left heartbroken during his first audition in front of the judges. It was a classic X Factor sob story but little do viewers know Matt and Jazz are still very much together. She did split with him very briefly at one point but they’re currently very loved up and even living together in the same flat.”

Friends of Matt think Jazz is only interested in him for the fame. “It’s funny what a bit of fame can do to some people as Jazz went crawling straight back into Matt’s arms as soon as his first audition aired.”

More recently, however, Terry has said that the rumors are false, and that he’s not back together with Jazz. This doesn’t mean the two aren’t friends, though. Last Friday, the singer told Reveal, “We are not back together but we’re good friends and on good terms. We are from the same friendship group so we said, ‘Let’s be mature about this and not make it awkward for anyone else.'”

Matt has received a lot of admiration from fans since his journey on X Factor began. Terry recently told The Star, “I’ve had some marriage proposals and dirty pictures, especially on Instagram where there’s that private inbox.” But for those of you who are excited about the singer being single, hold your horses–  Matt is happier than he’s been in a long time, and is focusing all his time on the show right now. He told Digital Spy, “[The X Factor] is a massive opportunity for me so I really want to take it with both hands – take it super seriously. I’m super focused and I hope it goes well for me.” 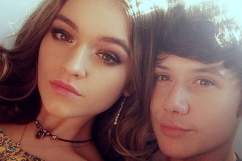