Tonight, the presidential debate airs on ABC at 9 p.m. ET, which means that Secrets and Lies will not be airing in its time slot, though Once Upon a Time will air at its regular time. Unfortunately, for S&L fans, the show will not air this week. However, it will resume its normally scheduled programming next week on October 16, 2016.

The episode “The Liar”, will air on the 16th and the official synopsis of the episode reads: Eric searches for Liam, Kate’s missing assistant whose real identity may have been unknown to her, and wonders about an encounter she had at a seedy motel. Meanwhile, Cornell blindsides Eric with revelations from an ex-girlfriend; and a mysterious woman with possible ties to Liam may have been involved in Kate’s death.

Episode 4 is titled “The Detective” and that will air as scheduled on October 23, 2016. The plot description of that show states: Patrick makes a major gaffe at work by failing to cover for Eric, and then finds himself caught in Cornell’s investigation. Meanwhile, Eric and Danny have company in their search for Liam; and a devastating betrayal rocks Eric’s world.

For the details on the regular schedule of Secrets and Lies, the cast and more, read on below.

SEASON 2 PREMISE: Eric Warner, a newlywed heir to his family’s equity firm, is suspected of his wife’s murder and Detective Cornell is on the case. 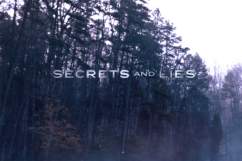