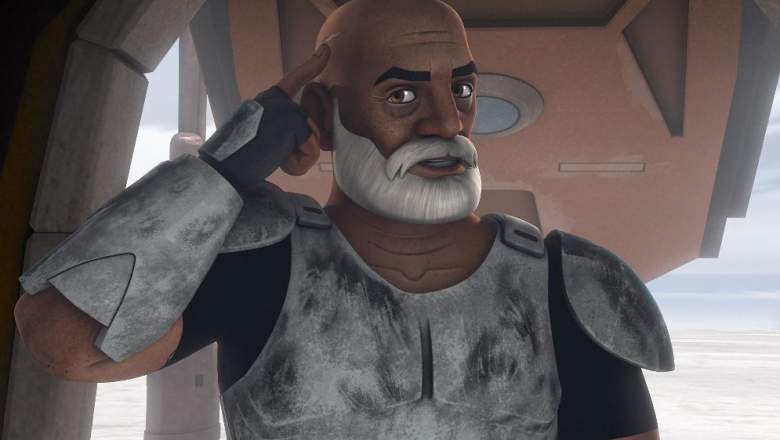 After last week’s fantastic episode, “Hera’s Heroes,” the sixth episode of Star Wars: Rebels returns Captain Rex to the frontlines. During season two, it was revealed that Rex survived the Clone Wars and had his inhibitor chip removed so he did not turn on his Jedi commanders when Order 66 happened. He’s now fighting for the Rebellion and is on his way to fight one more battle that could finally close the book on the Clone Wars. That’s why the episode is called “The Last Battle.”

Let’s take a look at how the last battle of the Clone Wars unfolds.

The episode kicked off with Zeb, Kanan, Ezra, Chopper and Rex being dropped off on a mysterious, icy world called Agamar, where a Separatist cruiser from the Clone Wars lies in ruins. The team hopes to pick up some supplies for the Rebellion. Ezra picks up an old droid head and doesn’t think they look dangerous. Rex reminds him that those droids were dangerous and killed thousands of Republic troops. “Battles leave scars, some you can’t see,” Kanan tells Ezra.

Rex is behaving like it’s the old days and does recon of the ship’s hangar first, finding a load of proton bombs. Chopper overhears a “Roger, Roger,” and speeds off towards the sound. It appears that the ship isn’t so abandoned after all. Meanwhile, the other members of the team get stuck in a ray shield in the hallway. “You have been captured by the Separatist Alliance,” one battle droid tells them.

After the title, the droids refer to the team as “Republic invaders” and receive mysterious orders to incapacitate them. They shock the team and they collapse on the ground. Thankfully, Chopper was outside the ray shield. Hopefully, he gets around to helping them out of this mess.

It turns out that the droids are under the command of a super tactical droid named Kalani. The droid commander explains to Rex that the droids on Agamar believed that the shutdown command sent to all droids after Order 66 was a trick. So, they continued functioning. Rex tells Kalani that the war is over, but he refuses to let them go. Kalani plans on ending the Clone Wars on his terms.

Kalani wants Rex, Ezra and Kanan to prove who really had the best tactics in the war. So, he has a “war game” scenario. He’ll hold Zeb as a hostage and the others have to pull off the “Jedi Rescue” scenario. Rex refuses to play along and Kanan doesn’t really want to relive the Clone Wars either. But Ezra jumps at the chance to fight the last “battle” of the war. Kanan agrees that following along might be easier than trying to escape and Rex begrudgingly agrees. Ezra insists that if they win, Zeb is freed and they get to leave with the proton bombs. Kalani agrees. Meanwhile, Chopper finds an old shuttle that he powers up to send a distress signal..

In space, the Ghost is in its usual circumstances: being shot at by Imperials. On the Star Destroyer, the Imperials intercept Chopper’s distress signal from Agamar. Pryce orders troops at the nearest Imperial outpost to head to Agamar.

This Is Where The Fun Begins

On Agamar, Kalani explains that Rex, Ezra and Kanan have to fight their way back to the bridge to rescue Zeb. They let Rex take the lead, since he has more battle experience. Rex thinks that surprise might be the way to go, but that’s not going to help because Kalani has a full battalion of droids. After scattering the droids, they sweep through them and they make it into the hangar. Kalani baited them, and launches destroyer droids from above.

Ezra spots a crane and figures that they can use that to break the catwalk the destroyers are on. While Ezra runs to the crane, Kanan and Rex draw their fire. But Kalani expected them to split up, so he launches another wave of battle droids. Ezra bumps into Chopper in the hangar and Chopper reveals that he sent a distress signal. Chopper shows Ezra the shuttle, but they can’t leave without Zeb.

Rex gets impatient and jumps out behind the crates. He’s then shot by a destroyer! On the other side of the hangar, Ezra uses the Force to move the crate, knocking the destroyers off the catwalk and destroying them. Kanan pulls Rex up off the ground and thankfully, he’s OK. “Generation one armor always holds up,” Rex says. (I’m sure some Stormtroopers would like to have that armor.)

Once they move into the hallway, Rex gets angry with Ezra over the delay in executing that plan. He’ll have none of Ezra’s shenanigans when his life is on the line. Kanan tells Ezra that Rex needs things done his way. “Just like that droid,” Ezra remarks.

While fighting destroyer droids in the halls, they learn that the droids they are fighting are getting old. Perhaps they can use that to their advantage. They do make it all the way to the bridge and Kalani refuses to accept defeat. Ezra points out that the droids are malfunctioning and that’s the only reason why they won. Kalani says Ezra is correct, but Ezra says that doesn’t mean they lost.

Ezra then puts forth what might be one of the most important questions central to the Star Wars story. If the Republic’s clones were decommissioned and the Separatist droids shut down, who really won the Clone Wars? The Separatists didn’t get what they wanted and the Republic crumbled, turning into the Galactic Empire. “Uh, the Empire,” Zeb chimes in, just as they arrive on Agamar.

Kalani sends out the battle droids to meet Stormtroopers, who just ignore the droids and keep talking amongst themselves about how outdated the droids are. The troopers shoot the droids, as the Imperials drop off two AT-ATs and AT-DPs.

Ezra explains to Kalani that they are now on the some side, although Rex doesn’t want to fight alongside clankers. Kalani accepts Ezra’s logic though – the Separatists were fighting the tyranny of the Republic and now that the Republic is the Empire, the Rebellion and Separatists (what’s left of them, anyway) have a common enemy. Kalani also accepts their help in coming up with a plan to fight the Imperial forces.

They come up with a plan that involves rolling the proton bombs into the field where the AT-AT walkers are. These will destroy the walkers. Kalani suggests that Kanan and Ezra can redirect blaster bolts from the battle droids to blow up the bombs. Meanwhile, Chopper will get the three chuttles ready so they can escape.

Amazingly, the plan works, although one shuttle full of battle droids didn’t make it. Kalani doesn’t want to call it a victory, but Rex insists that it was, even though they didn’t leave with the bombs they wanted. Rex tells Ezra that he really ended the Clone Wars by finding the common ground between droids and clones. Kalani also accepted that the war was over, but doesn’t want to join the Rebels. He calculates that they have a 1 percent chance of beating the Empire and won’t be a part of that.

Thankfully, the Ghost is orbiting Agamar and is ready to pick up the rest of the team. They don’t need a pick-up though. Sure, they didn’t get the bombs, but at least they got a new ship for Sabine to paint.

The next new episode of Rebels doesn’t air until November 5 and is titled “Imperial Supercommandoes.” In the meantime, we’ll have this episode fresh in our minds. “The Last Battle” wasn’t a great episode, but it did provide some closure for Rex and the Clone Wars itself, even if it was on a much smaller scale than the Clone Wars deserved.