Tommy Ford pictured with his and Sasso’s children, Madison and Thomas.

As reports and rumors spread about the possible death of Martin star Tommy Ford on October 12, his ex-wife Gina Marie Sasso, 53, quickly emerged as the only source of real information. She told TMZ that her husband is in grave condition and is on life support at an Atlanta hospital. The gossip site notes that Ford has been hospitalized since October 9 “after an aneurysm ruptured in his abdomen.”

Here’s what you need to know about Ford’s ex-wife:

1. She Says Ford’s Family & Friends Are Still Praying for Him

TMZ reports that Ford’s family do not believe that he will make it through the day but Sasso said that they’re “still praying for him.”

The rumors of Ford’s passing gained momentum when Blackish star Anthony Anderson tweeted that Ford had died. Anderson later retracted that statement saying, “I was given misinformation about our friend. That’s why the tweet was removed. We are all still praying for Tommy. He needs us even more.” On October 11, Anderson had tweeted, “Prayer is POWERFUL! I humbly ask 4 UR prayers 4 a friend. His name is Tommy. They say he may not make it thru the night but miracles happen!”

2. Martin Lawrence Was a Groomsman at Their Wedding

Online records show that Ford and Sasso were married in Las Vegas in April 1997. Jet magazine reported at the time that the wedding took place at the Rio Hotel & Resort. The article says that the couple met in 1996 and that Rose is a native of Kingston, Jamaica. Sasso was on business trip in Los Angeles when she first encountered Ford. The piece adds that she owns a sales and marketing firm. Among the groomsmen were Martin co-stars Martin Lawrence and Carl Anthony Payne II. The happy couple had their honeymoon in Aruba. Their wedding would have come right at the end of Martin’s five-year run.

The couple has two children together, son Thomas, 19, and daughter Madison, 15. On his IMDb page, Ford wrote that he and Sasso divorced in 2014.

3. After Their Divorce, Ford Was Accused of Being Aggressive During Their Relationship

In September 2014, after Ford and Sasso had split, his babymama, Vanessa Simmons filed a restraining order against him, according to Sandra Rose. Simmons said that Ford had been aggressive and physically threatening to her. She added that during one incident, Ford, Sasso and Simmons had been involved in a three-way conversation that had been amicable. Simmons said that suddenly lost his temper and said, “F**k both of you b****s!”

Sandra Rose went on to say that Simmons had moved from Los Angeles to Atlanta after Ford said he had broken up with previous girlfriend, Viviane De Sosa Beattie. She later found that the couple had still be seeing each other. Ford would later release a statement on the allegations saying:

First and foremost, I thank God for blessing me and my children and the thousands of family members, friends and fans who have sent me messages of love and support during this time. I want you all to know that I have never physically abused anyone and would never put my hands on a woman for that matter.

Additionally, please know that there were several inaccuracies in the initial report and numerous outlets, including the most obvious, that there was never a restraining order issued against me. Instead, I filed a restraining order first earlier this year that was granted, and thereafter, under a court’s recommendation, it was established that the parents needed some mutual distance between us for the sake of the child.

It is unfortunate during this very personal family matter some individuals have sought to ruin my name, reputation and career, in hopes of accomplishing their own selfish goals.

Under advice of my counsel, I will not say much more at this time. I feel one hundred percent confident I will be vindicated and my name will be fully cleared. I ask that you reserve judgment, respect my privacy and continue to pray for all the individuals involved, including my children in particular, who have to painfully live with and read these horrible allegations, which they did not ask to be a part of each and every single day.

Again, I thank God and know that God, like many of you, has my back and will continue to stand with me. Thank you so much for all your love and support.

Online records show that Sasso now lives in Miami, Florida. Since October 2000, she has been a registered Democrat.

5. Ford Has a Burgeoning Career as a Motivational Speaker

As well as acting, Ford is a motivational speaker, preaching about the perils of drugs and violence. He writes on his official website:

Young people mirror the images of those that they perceive are cool! Actors, singers, rappers, athletes and entertainers. I have done more than 200 episodes of television, more than two dozen films, and close to 100 theatrical performances!

While I have the platform it is my opportunity to let our children, youth and adults know that they’re beautiful, they’re powerful, they’re valuable and they’re worth-while! 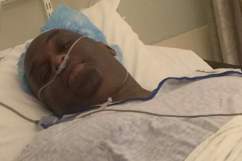