Do you hear that noise? It’s the opening of “Hooked on a Feeling.” The song will get back in our heads thanks to Marvel‘s Guardians of the Galaxy, Vol. 2. The studio released a “sneak peak” for the film, which is still not technically a teaser or trailer. Whatever the studio wants to call the 86-second video, it does provide a few cool shots from the film, which will not hit theaters until May 5, 2017.

Since the clip is so short, it’s impossible to gather much about the new film. We do see a funny sequence between Drax (Dave Bautista) and Peter Quill (Chris Pratt), where it’s clear that Peter is hoping to get romantically involved with Gamora (Zoe Saldana).

“You just need to find a woman who is pathetic, like you,” Drax tells Peter.

In addition to Chris Pratt, Dave Bautista and Zoe Saldana, Bradley Cooper will be back to voice Rocket and Vin Diesel will be the voice of Groot again. They will also be joined by Kurt Russell, who was introduced as Ego, Peter’s father. Sylvester Stallone also has a mysterious role.

Baby Groot does make a very brief appearance at the end of the teaser on Rocket’s shoulder. This teaser isn’t expected to be shown ahead of Doctor Strange on November 4. A longer trailer for Guardians is expected to be shown before Rogue One: A Star Wars Story on December 16.

Like the first film, Guardians of the Galaxy, Vol. 2 was directed by James Gunn.

Marvel also released the following poster, which does include Baby Groot. 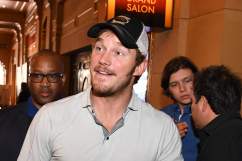 SDCC: What We Learned About ‘Guardians of the Galaxy, Vol. 2’