He might be about to become one of the biggest heartthrobs in the world but Dan Stevens’ legions of fans will have to come to terms with the fact that he’s a very happily married man. Stevens married Susie Hariet in 2009. The couple had been in each other’s lives since 2006 when they were both performing in the English steel city of Sheffield. Their family expanded in 2009 when Hariet gave birth to a daughter, Willow, and it expanded further in 2012 when they had a son, Aubrey.

His career is about to go into overdrive after the official trailer Beauty and the Beast dropped on November 14. The movie opens in the U.S. on March 17.

1. Stevens Says That Hariet ‘Is Totally Sympathetic to the Actor’s Life’

Stevens and Hariet attend the gala screening of ‘Summer In February’ at The Curzon Mayfair on June 10, 2013 in London, England. (Getty)

Stevens told the Daily Telegraph in 2011 that Hariet “is totally sympathetic to the actor’s life.” While the Observer reported in 2012 that Hariet was on set while her husband performed in the steamy romance, Summer in February. That piece refers to her as “quiet, soft-spoken.” It adds that Hariet “then pregnant, would stand off to one side with her daughter and watch her spouse perform steamily romantic scenes, one take after another.”

The star went into further detail about how reliant he is on Hariet in an interview with the Australian saying, “I’ve been so lucky in that my wife has been incredibly understanding and supportive. Had that not been the case, things might not have been quite so easy.”

After Stevens got buff for his role in the movie The Guest, he told the Guardian that, ” it was surprising. I have never looked like that in my life. My wife was very happy.”

2. Hariet Is 7 Years Older Than Stevens

He further elaborated on how the couple met in an interview with the Australian saying, “She was just beautiful, that’s all there was to it.” The couple married when Hariet was six months pregnant with their daughter, Willow. He credits his wife with helping their transition into parenthood.

In February 2012, Stevens told Channel 24 in South Africa that his family loves “coming out to South Africa, it’s our second home. We spend quite a lot of time in Jo’burg.”

While the Observer reported in 2012 that Stevens had moved his entire family from London to New York. He told the newspaper, “This feels big. Uprooting the family and coming here has been a sort of seismic shift.” Stevens also told Broadway.com shortly after the move that the family had settled in Brooklyn. He said:

We’re absolutely loving it. We’ve been enjoying the park and the museums. We took a trip on the Staten Island Ferry today to see, as my daughter calls it, the “Statue of Libertry.” [Laughs.]

And I really enjoy going on the boating lake in Central Park with my daughter.

According to a New Yorker feature, the family lives in the Brooklyn Heights neighborhood.

4. Hariet Was Involved in the Creation of Stevens’ Character in the Series, High Maintenance

Hello Magazine reports that in addition to her jazz singin, Hariet also works as a teacher. The Daily Telegraph referred to her a “jazz vocalist-turned singing teacher” in 2011.

In addition, Hariet played a role in the creation of Stevens’ character for his role on High Maintenance, according to a Buffalo News article.

According to her IMDb page, Hariet has acted in three movies, the last coming in 2010.

Rebecca Hall attends the 8th Annual Governors Awards hosted by the Academy of Motion Picture Arts and Sciences on November 12, 2016, at the Hollywood & Highland Center in Hollywood, California. (Getty)

The godmother to the couple’s daughter is none other than Stevens’ Permission co-star Rebecca Hall.

In 2005, the New Yorker reports that Stevens and Hall appeared in the Shakespeare play As You Like It at Brooklyn’s BAM theater.

While their son is named Aubrey for “Aubrey Beardsley [the 19th-century English illustrator], but also for C Aubrey Smith,” according to an interview Stevens gave to the Australian. He also told the newspaper that the name Willow was partly because, “I’d never met a Willow.” 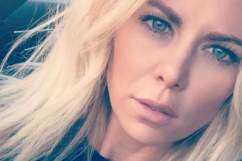