Florence Henderson, best known for playing the role of Carol Brady in the 1970s sitcom, The Brady Brunch, died on Thursday night, her manager told the Associated Press. The actress was 82. According to the outlet, Henderson passed away at Cedars-Sinai Medical Center in Los Angeles, surrounded by friends and family. Her manager, Kayla Pressman, said in a statement that the actress was suffering from heart failure when she checked into the hospital. Henderson is survived by four children from her first marriage: Elizabeth, Barbara, Joseph and Robert. In the photo above, Henderson poses with her daughter, Barbara Chase, at ABC’s 200th episode party for Dancing With the Stars. Click through our gallery to learn more about Henderson's children. (Getty) 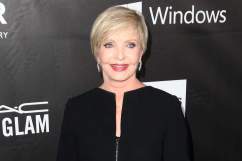