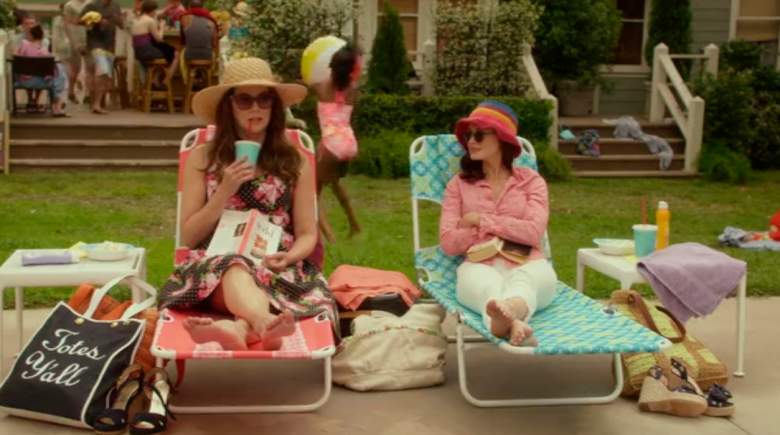 Summer has begun and Rory Gilmore is back at home with her mom. Oh, wait … She insists that she is NOT back and that she is just staying in town temporarily.

Next, we see dinner at the Gilmore girls’ house in Stars Hollow, with a visitor – a grown up April, Luke’s daughter. She is an MIT girl, 22 years old, and has a nose ring. Soon, she’s going to head into graduate school, but is going on a road trip with friends, exploring the legalization of marijuana. It seems pretty clear that she’s a pot-smoker, though Luke believes her when she says she isn’t. She confesses in private to Rory that she does actually smoke weed. She then goes back on what she said and reveals she only smoked pot once. April begins to have a melt down, showing her true self, that she wants to get rid of her nose ring and that she’s not as “cool” as she was putting on. Rory talks April off the ledge. 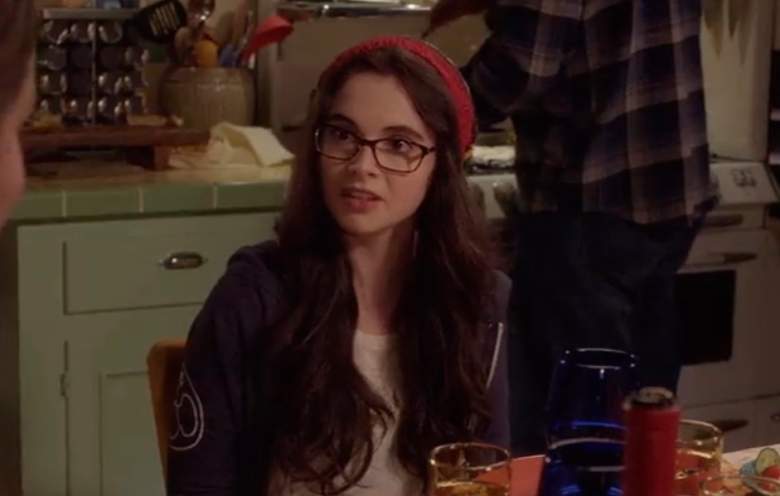 Later in the night, Rory calls back Logan, who had left her voicemails. She wants to visit him sooner and finds out that his fiancee moved in with him. Rory settles on visiting Logan in three weeks, though she’s clearly disappointed.

Rory heads to a town meeting and is bombarded with “welcome backs.” Taylor is going to make a “big announcement” at the meeting when the air system goes haywire. Taylor ends up revealing that they are creating “Stars Hollow: The Musical” and Lorelai volunteers to be in the advisory committee. Taylor also reveals that the Stars Hollow Gazette is closing down since the editor has retired and there’s no one to take his place. Rory becomes upset about the news.

Miss Patty and Babette are working on casting for the musical. While walking past the auditions for the musical, Lorelai sees her overly-enthusiastic psychiatrist in line to audition. Rory continues to dwell on the Stars Hollow Gazette closing and confronts Taylor, telling him not to close it down. Rory, now has the job of heading up the Gazette as the new editor.

Back at the Dragonfly Inn, we are in the Twilight Zone as Michel is being extra nice to customers. Michel asks Lorelai if she knows that he recently celebrated his birthday. He asks that she take him out for a drink “to talk.” They hit up a local place called The Secret Bar, where Lane and Zach are quietly playing music in the back. Michel tells Lorelai that he is leaving the Dragonfly Inn and recently met with the W Hotel. Michel says he needs more money and more expansion, saying he has a baby on the way.

All of a sudden, the entire place goes dark and everyone hides as Taylor walks by. Once Taylor leaves, the bar action resumes.

While trying to figure out the ways of the Stars Hollow Gazette, Rory finds that the computer equipment is insanely out-of-date. Lorelai stops by to talk with Rory, who busts some alcohol out of her desk for the two of them. Lorelai cries that Michel is leaving the Inn and that he’s given her three months to find someone new.

Once Rory gets all the issues of the paper printed, she tries to figure out how to deliver them all. At the Inn, Luke is stepping in to help in the kitchen and is taking his frustrations out on Michel, as well as Lorelai. Rory interrupts them, enlisting Lorelai to help her deliver her first edition of the Stars Hollow Gazette. Rory receives criticism after she decides to not post a poem on the cover, which is a tradition of the Gazette. Rory also gets an angry phone call from Doyle, whose movie review she criticized in the Gazette. Doyle also complains about the missing poem to boot. 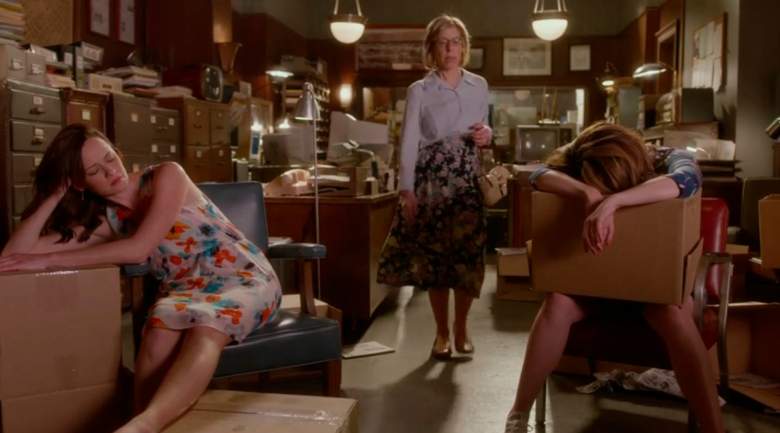 Rory calls Grandma Emily and she gets woken up by the phone call, which is at noon. She seems very disoriented and her behavior is of concern to Rory.

Lorelai and the other advisers for the Stars Hollow musical sit back and watch the first presentation of the musical. The presentation is made for feedback and critiques. Lorelai exclaims, “What the …?” when she sees it’s a story of domestic abuse and alcoholism. The actors then change into Pilgrims’ outfits out of nowhere, singing about building Stars Hollow. The musical continues to time hop. Then, in the middle of the show, another actor comes out and tries to rap, mimicking the essence of the Broadway musical “Hamilton.” Lorelai is hating the show, while the others in the crowd seem to enjoy it.

Carole King is actually playing one of the advisers on the advisory committee and her character reveals that she has some original songs she could contribute to the show. She then starts to perform “I Feel the Earth Move,” a famous Carole King song. Taylor is not a fan and declines the offer.

Emily is meeting with her fellow members of the D.A.R. (Daughters of the Revolution). Rory drops by and the meeting is adjourned. One big change that Rory notices is that there is a TV in the living room, where they always have their pre and post-dinner drinks. Rory worries that Emily hasn’t been getting out of the house or socializing. Rory encourages Emily to update her membership at The Club, where she and Richard would frequent. After the visit, Emily sends Lorelai to go see Grandpa Richard’s latest grave stone.

Rory decides to put back the usual poem on the cover of the Gazette. While at the paper’s office, ex-boyfriend Jess walks in and asks about how Rory landed the job at the not-so-prestigious Gazette. Rory pours the two of them a drink and Jess reveals he still works in books. Rory then remembers she still needs to break up with her boyfriend. She reveals to Jess that she’s broke, her license has expired, she has no home and she feels like a failure. Jess offers to give her money, which she says she doesn’t need. He tells her that she is just in a rut and that rut’s are normal for writers. 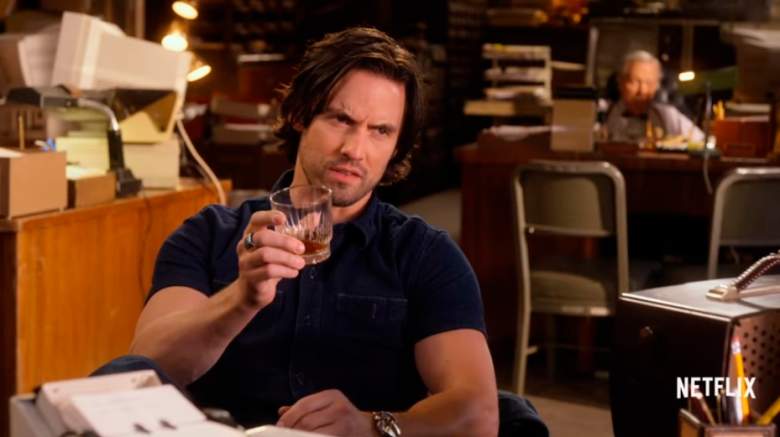 One week later, Lorelai goes to her mother’s house, finding Richard’s friend Jack Smith sitting down with Emily. Jack is going to drive them to the cemetery to see the grave stone and Lorelai freaks out, calling Rory on the phone. Rory is caught off-guard as well and Lorelai ends up confronting her mother about Jack. Rory agrees to meet them at the cemetery because she lost track of time at the Gazette.

Emily ends up revealing to Lorelai that she took Luke traveling around to scout franchise locations for the diner.

Rory, Lorelai and Emily bring flowers to Richard’s grave site while Jack waits at the car. Again Emily has an issue with the head stone, which is the fifth one so far. While at the cemetery, Rory tells Lorelai she’s been looking for a place to live in Queens, New York. She also tells her mother that she’s writing a book, a non-fiction book about their relationship. Lorelai gets upset and says she doesn’t want Rory to write about her life. And, when Lorelai hears that Jess suggested it, she becomes extra defensive. Rory feels that Lorelai is overreacting and she feels it’s a sign that this is what she is supposed to do in life. Rory pleads with her mother for her blessing on the project, but Lorelai refuses.

A frantic Lorelai heads over to Luke’s diner, where she confronts him about his grumpy behavior. It then comes out that they each lied to each other about the franchise locations and about not going to therapy with her mother anymore. Luke doesn’t quite believe Lorelai is going to therapy just by herself. This blows up into a discussion about why their lives have been so separated from each other.

Rory vents to Lane about her mother’s meltdown over the book. Amid their discussion, she accidentally calls Logan … three times. When Logan finally speaks with her on the phone, Rory sadly breaks off their “arrangement.”

After some reflection at the Stars Hollow Musical, Lorelai tells Luke that she’s going to “do the movie Wild.” She says she’s going away for a few weeks or even longer. Luke asks her why she’s going and she says, “because it’s never or now.”

And the episode ends. 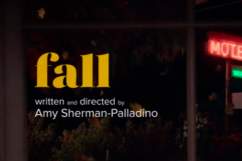 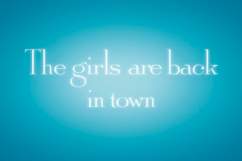 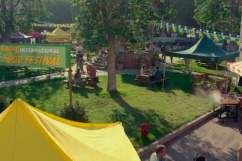