@hinchtown is on @theellenshow today at 3pm!! Also tune into #DWTS tonight and vote #teamstopandgo on Facebook or at http://dwtsvote.abc.go.com. Wish I could be there ❤️

James Hinchcliffe is one of the semi-finalists on Dancing With the Stars and he is partnered with sexy pro dancer Sharna Burgess. With his being in the spotlight, many viewers want to know if the race car driver has a wife. Is he married? Does he have a girlfriend?

Over the summer, People reported that Hinchcliffe was dating a woman named Rebecca Dalton. The couple has a cockapoo together and even have an Instagram account for him.

With Hinchcliffe taking on Dancing With the Stars, his girlfriend Dalton has been by his side cheering him on.

Rebecca “Becky” Dalton is an actress who is also from Canada and she has appeared in projects on the Hallmark Channel as well as the Lifetime Network. Some of the movies she has appeared in are The Unauthorized Melrose Place Story, Total Frat Move, A Perfect Christmas, and Good Witch.

According to her IMDb page, Dalton was born on January 10, 1989 in Oakville, Ontario, Canada.

She previously starred with Mark Salling in the movie Rocky Road. In recent months, Mark Salling, from Glee, was indicted for possessing thousands of obscene photos and videos featuring children as young as 5 years old, according to Radar Online. Salling’s next court date is January 23, 2017. 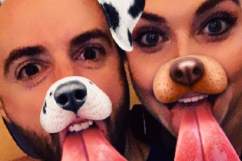 Read More
Dancing With The Stars, DWTS
Does DWTS contestant James Hinchcliffe have a wife or girlfriend? Is he single or married? Get the rundown on his reported girlfriend Rebecca "Becky" Dalton.