35 Years Later, New Clues May Solve Keddie Murder MysteryThe three were tied up, bludgeoned and stabbed to death. Sue’s 12-year-old daughter Tina was taken from the cabin, but her decomposed remains wouldn’t be found for another three years.2016-05-03T07:01:29.000Z

On the morning of April 12, 1981, Sheila Sharp walked into her family’s cabin in Keddie, California, to find her mother, brother, and a family friend murdered on the living room floor. Her sister’s remains were found three years later. Tonight, People Magazine Investigates will examine the quadruple homicide, and speak with Sheila Sharp, who is now a married mother of three and grandmother of two.

Read on to learn more about the Keddie cabin murders.

1. Tina’s Remains Weren’t Found Until Three Years After the Murder

John (15) spent the afternoon of April 11 in Quincy with his friend Dana (17). According to The Lineup, the pair was last seen walking along Route 70, and it’s unclear if they returned to cabin 28 in the middle of the murder or if they had been downstairs, in John’s basement room, when they heard the commotion upstairs. Some believe that Johnny and Dana hitchhiked home and led the killers to the cabin.

That night, Sue (36), John, and Dana were bound with tape and electrical wire and murdered in cabin 28. Sheila was returning from a sleepover the following morning when she found them. Tina, Sheila’s sister, was 12 at the time, and was nowhere to be found.  Three years after the attacks, Tina’s skull was found in woods about 50 miles away.

2. Police Believe There Was More Than One Murderer

Sue, John, and Dana all suffered violent deaths. The Lineup writes, “… they had been stabbed, bludgeoned, and strangled to death. Examinations revealed that the victims suffered blows from at least two different hammers of varying sizes, and Sue and John had been stabbed repeatedly. Sue had also been bludgeoned with a Daisy Powerline 880 rifle, while Dana Wingate was strangled to death by hand.” 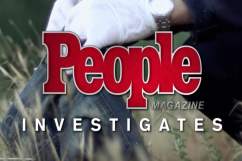 ‘People Magazine Investigates’: What Time & Channel Is It On?

3. Sue’s Youngest Sons Were in the Cabin That Night

5 things to know about the Keddie Cabin Murders — and the new hunt for the killers https://t.co/pmjNYj3Osr pic.twitter.com/ggKB0tXOlV

The night of the murders, Sue’s two youngest sons (Greg and Rick, ages 5 and 10 respectively) and their friend, Justin Smartt, were having a sleepover in the bedroom adjacent to the living room. They were found asleep and unharmed the next morning. According to Crime Magazine, Ricky and Greg claimed to have slept through the incident, but Justin Smartt’s statement has not been as consistent over the years. “At times, he has claimed to have seen the killers, but other times he says he only had a dream about seeing the murders take place.” The outlet also reports that police think Justin touched at least one of the bodies that night since blood was found on the inside doorknob of the boys’ bedroom.

4. No Arrests Have Been Made in Connection With the Murders

Inside the chilling Keddie Cabin murders of a young mother and kids https://t.co/wdgCUhOewM pic.twitter.com/flbwpBOprw

People writes that Sue’s neighbor, Marty Smart, and his wife, Marilyn (and Justin Smartt’s mother) were questioned after the murders. “Bo” Boubede, an ex-con and friend of Marty, also spoke to the police. People reports that after the killings, Marty wrote Marilyn a letter that read, “I’ve paid the price of your love & now that I’ve bought it with four peoples lives, you tell me we are through. Great! What else do you want?” The outlet adds on that Gamburg, the Plumas County Sheriff Special Investigator who was asked to revive the case, recently tracked down a therapist who Marty allegedly confessed to. The therapist “… told Gamberg he was shocked to learn that investigators at the time didn’t use that confession to solve the crimes.”

In March of this year, Plumas County Sheriff Greg Hagwood revealed that progress has been made in the investigation. He told the Plumas County News, “We’re arriving at points where we are going to be taking some next steps… We want to make it clear to those individuals who are monitoring what’s going on with this case that we are making progress. And we are going to continue.”

In April, Kolo TV reported that even more evidence had surfaced. Three years ago, Plumas County Sheriff Special Investigator Mike Gamberg was asked to return to investigate the case, and says he “jumped at the chance…”  Gamberg recently discovered an unopened audio recording of an anonymous call from someone who helped identify the remains of Tina Sharp. Another tip then led him to a hammer that was found near the original crime scene. Gamberg believes the hammer is one of the murder weapons that was used the night April 11, 1981. Both Gamberg and Hagwood have said that there are still people alive who are persons of interest.

5. The Cabin Has Since Been Demolished

In 2004, cabins 27 and 28 were demolished, along with other condemned buildings on the ground.

According to Crime Magazine, Keddie, California, used to be a place that lured people in with its natural beauty. The town was once “an ideal place to raise a family”, and is situated about 87 miles from Reno, Nevada. The Sharp’s initially moved to Keddie Resort in the 1980s when the its owner, Gary Mollath, decided to rent the cabins out to low-income families. To this day, the Keddie Cabin Murders are considered the most violent attack in the history of Plumas County.

Shannan Gilbert: The Photos You Need to See