Tonight, Leah Remini premieres her docu-series Leah Remini: Scientology And the Aftermath, which features stories and claims made by former members of the Church of Scientology as well as former executives. For all the details on the show, when to watch it on TV, what channel it airs on and more, read on below.

EPISODE TITLES REVEALED:
– Premiere “Disconnection” – Leah visits former Scientology executive Amy Scobee and her husband, as well as her mother, to hear about how being “disconnected” from family affected them.
– “Fair Game” – Leah goes to Clearwater, Florida and to the spiritual headquarters of Scientology. Co-star Mike Rinder gives his personal story.

MISSION: In a statement released by the A&E network, the mission of this docu-series is to “shed light on information that makes the world aware of what is really going on and encourages others to speak up so the abuses can be ended forever. I hope that people who have left now feel they have a safe place to go. I hope others who have also experienced abuses will come forward and help us to do something about it.” 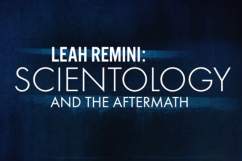