At Sunday’s AMAs, Selena Gomez accepted the award for Favorite Female Artist in the Pop/Rock category. The evening marks the first public appearance by Gomez since August, when she took time off from her career to focus on her emotional health. In an interview with E! News before her break, Gomez revealed that she needed to step away from the spotlight because of anxiety, depression, and panic attacks that were a side effect of lupus. “As many of you know, around a year ago I revealed that I have lupus, an illness that can affect people in different ways… I want to be proactive and focus on maintaining my health and happiness and have decided that the best way forward is to take some time off. Thank you to all my fans for your support. You know how special you are to me, but I need to face this head on to ensure I am doing everything possible to be my best. I know I am not alone by sharing this, I hope others will be encouraged to address their own issues.”

Selena fought back tears during her acceptance speech, telling fans that she was broken and had to get away from everything to heal. The honor marked her first AMA award, and during her speech, Selena spoke about the struggles she has dealt with. “Thank you guys so much. In 2014, this stage was actually the first time that I was authentically 100 percent honest with all of you. I think it’s safe to say most of you know my life whether I liked it or not. And I had to stop. Because I had everything. And I was absolutely broken inside. I kept it all together enough to where I would never let you down, but I kept it too much together to where I let myself down.”

She added on, “I don’t want to see your bodies on Instagram. I want to see what’s in here”, she said, patting her heart. “If you are broken, you do not need to stay broken.” Fans took to Twitter to express their love for Selena.

Selena Gomez's speech was beautiful. One of the best I've ever seen. #AMAs

Selena Gomez. The Queen of standing up for herself. I'm so happy she won you guys. She deserved that! Her spirits are high tonight :) #AMAs

Can we talk about how BEAUTIFUL @selenagomez looks tonight?! ? #AMAs pic.twitter.com/Dfk1TCmU1B 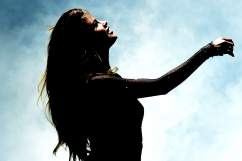