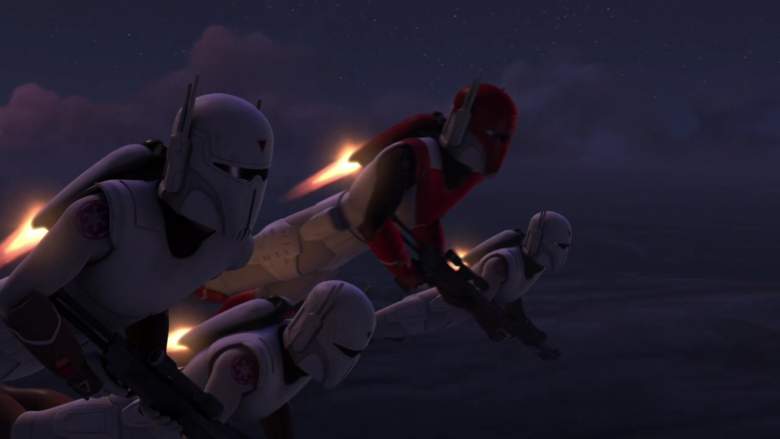 After a week off, the fight against the Empire resumes with the seventh episode of Star Wars Rebels Season 3, “Imperial Super Commandos.”

Here’s a look at all the action in “Imperial Super Commandos.”

Even the Protectors Aren’t Safe From the Empire

The episode opens with Rau and Sabine playing a holographic game in his cell aboard a Rebel cruiser. Rau beats Sabine in the game and tries to understand why she keeps coming to see him. Sabine still tries to convince Rau to get the Protectors to join the Rebels, but he refuses. Instead, he takes Sabine on a guilt trip for leaving Mandalore. Zeb interrupts them before the conversation can continue because Hera wants both of them in the war room.

The Rebels lost contact with Concord Dawn, so some fear that the Protectors betrayed them. Sabine, Ren, Ezra and Chopper fly to the planet for recon, using the Phantom II. (Sabine has already given the old Separatist shuttle from “The Last Battle” a paint job.) On the ship, Ezra tries to get a Mandalorian history lesson, but Rau takes advantage of Ezra getting easily distracted and hijacks the ship, using a blaster to stun Sabine.

After the title, Ezra and Sabine find themselves held captive. Chopper gets them out of the shuttle easily enough, but Rau landed the Phantom II. When they leave the ship, they find a stunned Rau looking over a cliff. The Protectors were attacked… but not by the Empire. Another Mandalorian clan attacked Rau’s men, at least, that’s what he thinks. Sabine’s not so sure though, since members of the Protectors come from different clans.

Meanwhile, an Imperial Probe Droid (like the one seen in The Empire Strikes Back) is listening in on their conversation. Chopper alerts them and they try to destroy it before it sends a signal. They can’t be sure if it actually did get a signal off before they destroyed it, so Sabine and Ezra think they have to leave as soon as possible. Rau wants to stay and refuses to leave with Sabine. After all, he can use the location of their hidden Rebel base as a bargaining chip if the Empire catches him.

Unfortunately, the Empire is already there and they sent flying Stormtroopers. Rau corrects Ezra: “Worse. They’re traitors. Mandalorians who serve the Empire.” (These super commandos look awfully similar to old Boba Fett concept art.) As the troopers land, the group tries to hide among the ruins of the Protectors camp. One finds Chopper in the shuttle and Ezra sacrifices his cover so Rau and Sabine can run.

After capturing Ezra, the leader of the troops introduces himself. He is Gar Saxon, Imperial Viceroy of Mandalore. By the way, Rau has Ezra’s lightsaber, which might actually help Ezra. You don’t want the Empire knowing you’re a Jedi after all.

So Much for Strategies

Ezra tries to convince his captors that he’s on Concord Dawn alone, other than Chopper. The commandos think Ezra is a member of the Rebellion, but he says he’s a member of the pirate Hondo’s crew. “He’ll vouch for me,” says Ezra. (I hate to break it to you, Ezra, but if the Imperials are paying, Hondo’s not going to help.) But Saxon says that the Empire knows that the Rebels are using this space to avoid Imperial patrols and threatens to blast Chopper if Ezra doesn’t talk.

Rau and Sabine are watching from the high ground (which as we all know, always gives you the advantage when trying to slice off your friend’s legs and arms…), overlooking where the Imperials took Ezra. Sabine thinks they need to get down there to save the ship, which has the coordinates to their base. Sabine also notes that Saxon looks familiar to her. “He should,” Rau says. “He’s Clan Viszla, like you.”

While Rau wants to make the traitors pay for what they’ve done, Sabine wants to save Ezra and get off the planet with their ship. She tells Rau that he can help and they’ll all get off the planet. He doesn’t care, as long as Saxon pays for killing his men.

In the Imperial camp, Ezra tries another story. “My name is Lando Calrissian. I’m a smuggler!” Saxon doesn’t buy that (we need an episode where Lando scams Mandalorians now) and tells him that with every lie, he’s giving up a shred of truth. Eventually, Ezra will give up what Saxon wants to know. Then, Ezra says he was sent to Concord Dawn by Rau, who Saxon has been waiting for. It turns out that Saxon let Rebel ships go through the system because he thought it would lure Rau back.

Rau and Sabine listened in on the whole conversation between Saxon and Ezra. Now that he knows that the Rebels saved him by capturing him, Rau agrees to make a truce. He’ll secure the Phantom II while Sabine saves Ezra. First, they sneak around and ambush one of the other commandos to get Rau a weapon and Sabine a jetpack. Rau subdues the commando in the ship.

Inside the tent, Ezra gives up the fact that he’s a Jedi by using the Force to push Saxon’s blaster fire away from Chopper. Just as Saxon realizes the truth, Sabine tosses in a thermal detonator, which quickly goes off. In the confusion and smoke, Sabine helps Ezra get out of there. As they run to the ship, they see Rau take off! So much for strategy.

Don’t Take This the Wrong Way, but Mandalorians are Crazy

After the break, Sabine, Ezra and Chopper are now standing against the commandos. Saxon identifies Sabine, which is a surprise to her since she doesn’t really know him. But Saxon reveals a surprising truth: Sabine’s mother is now working for the Empire. She doesn’t believe that her mother would willingly work for the Empire, but Saxon says that her mother joined after Sabine left the Imperial Academy. Saxon believes that Mandalore is getting stronger than ever before under the Empire.

Saxon gives Sabine a choice: Give up Rau and join the Empire or die. Sabine gives in, but she’s got a trick up her sleeve. She has Chopper send a jamming signal to the commandos’ comm channel. Sabine grabs Ezra (“Woah!”) and flies off, with Chopper following behind. Saxon orders his commandos to capture the rebels.

What follows is a really exciting canyon chase, as Sabine, Ezra and Chopper try to get to the commanos’ ship. This is the kind of action we’ve always wished to see from Boba Fett on the big screen. The chase ends with them getting to the ship, but Saxon and one of his other commandos makes it there, too.

At the last second though, Rau shows up! (Where would this show be without last-second rescues?) During the escape, Saxon drags Sabine down and the two fight it out. Rau uses the Phantom II to destroy the commandos’ ship and goes back for Sabine. She manages to get away from Saxon and onto the ship, but not without Saxon destroying her jetpack. (Bummer.)

On the Phantom II, Rau explains why he came back. “I realized you were willing to die for your people, even though they are not Mandalorian. You haven’t forgotten our ways,” he says. “That has earned my respect.” Rau then decides to join the Rebellion. He’s one more member for the team.

It looks like Saxon survived, so don’t think you’ve seen the last of Mandalorian action. The next episode of Rebels doesn’t air until November 19 and is titled “Iron Squadron.” It’s another mission for Sabine and Ezra, who try to stop a young pilot and his team from foolishly risking their lives.